Who is 'The Time Traveller's Wife'?

Singapore -- Adapted from the bestseller, ‘The Time Traveller’s Wife’ tells of a man’s peculiar condition, of being involuntarily subject to fading away, only to manifest in another time and place. It is suspected to be a medical anomaly, though Buddhism would see it essentially as karmic. 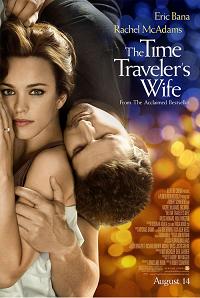 Time-travel is impossible though – as it would mess up the workings of cause and effect, with some effects becoming causes instead. Irreconcilable temporal paradoxes aside, the romantic story is really a wonderful skilful means for relaying important messages on life, love and loss. With Brad Pitt as the executive producer, who was involved in the making of ‘The Curious Case of Benjamin Button’, the story bears some similar themes on the passage of time.

When Henry time-travels, he always leaves and arrives naked. Nope, clothes and possessions cannot be brought along. This is reminiscent of how we come and depart from life itself – though when reborn, even one’s body cannot be brought along! The only baggage possible is one’s immaterial karma. Every time Henry re-manifests, he finds himself disoriented. Sounds like rebirth again, with a difference being his ready recollection of his ‘past lives’, which allows him to more readily increase in wisdom. Despite Henry’s repeated attempts to change the course of key unfortunate events in his past, he is unable to do so, which reminds us of how we cannot change our past; only our perception of it.

Being forced to live a new life every time he time-travels, Henry is able to visit many ‘random’ places and times, yet unable to find refuge anywhere. However, he is able to more or less will himself to visit a particular girl time and again, probably due to strong karmic affinity with her. Clare becomes his only anchor amidst the instability of it all. Her love became his refuge. For us Buddhists, the Dharma would be our true refuge, which is the unchanging truth and path that leads us to the transcendence of life and death. Sadly, even worldly love changes in time, which is what makes it worldly… though it can change to be purer, to be ever more spiritual love too.

Like Henry, we too travel back and forth in time. Yes, of course we travel forwards to the future. How do we travel backwards to the past then? By recollection of the past, by reconciling past regrets with remorse and remedial action. What else can we do? In a sense, Henry was stuck in the past too, as he still instinctively tries to alter its course many times. Of course, for the story to progress, he does get to change some minor events. It’s interesting how he sometimes re-manifests in a same place during a different time, as if forgetting the past when he was there… before feeling some deja vu. Sounds like how some recall past lives?

How do you love someone who is absent half or more of the time? How do you care for someone who comes and goes unexpectedly? Clare realises that her love doesn’t have to fade away just because Henry does. She also learns that love does not need to have and to hold always. The story brings the meaning of long-distance relationship to another dimension! The truth is, due to the practical demands and karmic unpredictability of life and death, we too are often unwittingly absent friends and lovers, also liable to ‘depart’ suddenly. Indeed, we can only love in the moment – in this moment; not in any other moment in the past or future. ‘Now’ is all we have. Even when Henry returns to the past, he has no choice but to live in the ‘now’ then.

Love that treasures the beloved despite changes, that is not clingy, must the the truest of love. In the case of Henry and Clare’s extraordinary relationship, it is much less conditional than ordinary love – because it is literally less physical and more ‘timeless’ – for in the heat of passion, Henry can vanish, and when he reappears, he is always younger or older! Then again, if the beloved changes too drastically, beyond recognition, who would the beloved really be? Wouldn’t loving someone else be the ’same’? Paradoxically, when love for one’s True Love becomes truly unconditional, not dependent on any conditions, who the beloved is doesn’t matter! It’s not fickleness though, because all will be loved equally too.

Henry catches a manifestation of himself dying in the future, and begins to worry for his family. Is it a curse or blessing to know how or when one will die? It would be a curse if one does not know how to face death graciously. It would be a blessing if one learns to accept one’s mortality, and makes the best of the moment before it becomes the last one. Since we will die eventually (unless we transcend the cycle of life and death in time), why not prepare for a meaningful exit, be we with or without knowledge of when we will leave? If we are able to recall our countless arrivals and departures like Henry, would be able to depart more gracefully?

If you can indeed travel back in time, what would you do? Our wisdom would guide us to undo our mistakes. Our compassion would guide us to help whoever we can help. Out of love for Clare, Henry even contemplated returning to the past, to tell a younger Clare not to wait for him. Before he ‘dies’, he likewise does not tell her of how he might return – also to relieve her of the burden of anticipation. Indeed, True Love releases attachment to the beloved, while not letting go of loving itself. This is how True Love gladly endures… life after life – like that of the great selfless Bodhisattvas and Buddhas!

Who is the time traveller’s wife? Beyond Clare alone, we too are like her at times – when we miss the absent beloved ones in our lives. Who is the time traveller? Beyond Henry alone, we too are are like him at times – when we we live on some other ‘timelines’, different from that of the beloved around us. When we live on the same timeline, we are present to one another. When otherwise, we become absent, invisible. Have you been ‘manifesting’ your presence with your love in the moment recently? Don’t wait until it is too late… because you can’t time-travel!