Singapore -- ‘Funny People’ is largely a comedy, but it is also a serious movie with elements of tragedy too. Okay, a tragicomedy it is then, with a heavier slant on comedy. It’s about a seasoned comedian (George Simmons, played by Adam Sandler), who was diagnosed with a fatal sickness, who thereafter struggles to take it lightheartedly – even cracking jokes about it. 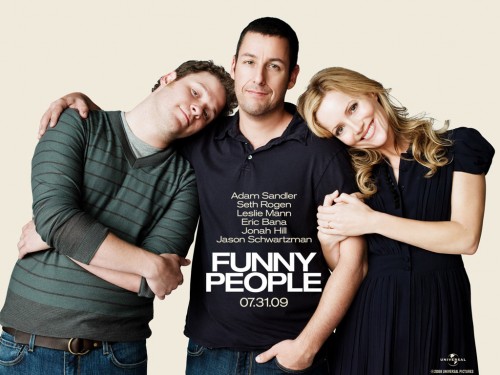 Though there were a couple of Buddhist references in the film, the line that was the most memorable to me was a simple one. George utters this with mild exasperation when he realised his sickness seemed healed…

Alright, alright…
Now what do we do?

His doctor suggests that he makes another funny movie. But is it worth it? I guess so, if wit is shared with wisdom generously to transform other lives? What’s intriguing about that line is that it applies to us too. Whether we are well or pronounced to be dying, we need to ask ourselves this – ‘Now what do we do?’ While George gets a new lease of life, we already have this lease of life. Our new life begins now. It always does. Even when George realised he was dying, his new life began then too – it took a turning point, as he reflected upon the worth of his life and changed his ways. Before, despite being rich and famous, he had no genuine connections with anyone – not even family and friends. When he learnt to care, his life became meaningful, worth living… before it was too late. As Stonepeace put it…

‘One can have a better rebirth now,
without dying;
by becoming a better person now.’

Though he celebrated with him on his apparent recovery, George’s doctor did warn him not to get his hopes up too high, as a relapse might just happen. This is the story of our lives too, isn’t it? The plight of the human condition – because we too can be struck by a fatal disease any time. And it’s a relapse of sorts too – because we are caught in the cycle of birth, ageing, sickness and death – due to being in the rounds of rebirth. Worse than that, beyond death by sickness, we can die any time via accidents. Bleak reality… but there is hope. When we change ourselves for the better, life does change for the better. Even if the karmic rewards do not bear fruits ‘in time’, one’s next life will be better. (For the record, here are the Buddhist related parts in the film. The character played by Eric Bana recalls having learnt the importance of openheartedness to the truth from Buddhism. Later, he accepts pain from his mistakes as karmic returns, and recognises that behind his anger is hurt, that behind the hurt is love.)