'The Blind Side' Seen

Singapore -- ‘The Blind Side’ tells the true story of how the once underprivileged and racially discriminated Michael Oher became a successful football player by proving his worth in various aspects of life – beyond just the sport. What is the blind side? 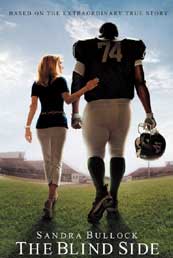 It refers to that side opposite of the direction a player is facing. As an example of this term in usage, when a right-handed quarterback sets up for a pass, the left tackle is responsible for protecting his blind side. Basically, a blind side is the wider version of a blindspot. This concept of interdependent protection reminds me of the Buddha’s admonition to members of the Sangha, now that they are living without their families (as paraphrased) – ‘If you do not take care of one another, who will?’

In many ways, Michael’s adoption by a generous family when he was a teenager revealed and protected the blind sides of many involved. For instance, Michael realised how much love and education he was missing, while the family members realised how much they could do for him out of sheer kindness. In this way, they looked out for and covered one another’s spiritual and material blind sides, transforming one another’s life for the better. When we give others a chance to prove themselves, we give ourselves to prove our humanity and worth too. Without beings to practise and perfect our compassion with, how can we ever give rise to Bodhicitta to accomplish the Bodhisattva path and attain Buddhahood?

At one point, Michael was made to question his new family’s intention for helping him. Was it just doing good… or to gain personal satisfaction? If it is the latter, is it still unconditional compassion? Are we sometimes unmindful of our motivations, even though our actions are good? It seemed to Michael for a while that the family was subtly steering him towards the school and star football career of their choice… and it was somewhat so… though it was unmindful and with no truly selfish intentions involved.

Once aware of this, they sincerely apologised and urged him to choose for himself. A blind side discovered and covered! With this incident, he appreciated them even more. Now… back to us for self-reflection… I wonder what blind sides do we have? A trick question… because we are blind to them – at least for now!