Cinema of spirituality: Buddhism in films 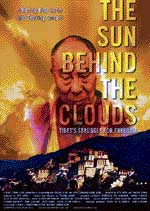 Peace maker Poster of Ritu and Sonam’s ‘The Sun Behind the Clouds.’These films convincingly, even ravishingly, capture qualities essential to a Buddhist-themed cinema: Silence, suffering, contemplation, poetry and mindfulness. The characters in these films undergo various kinds of intense spiritual struggle. Spirituality as a theme in cinema is rare. It is often forsaken for more ‘exciting’ themes — sexuality, violence, romance, family melodrama. If the spiritual, the mystical are present at all, they are present only as subplots; minor themes in the background.

Buddhism as a theme seems to have had only a glancing presence in cinema until the 90s. Earlier films such as Lost Horizon and The Razor’s Edge were Hollywoodised versions of Buddhist monks and monasteries. The 1956 film version of Heinrich Harrer’s controversial autobiography, Seven Years in Tibet, was another instance of Tibetan Buddhism used as an exotic backdrop in cinema.

It is only with Milarepa (1974) — Italian director Liliana Cavani’s little seen film — recounting the story of the Tibetan spiritual master, Milarepa — that we have the first film exploring Buddhism as a full-blown theme in cinema. Tibetan yogi, Milarepa, is one of the main teachers of Buddhism. In Milarepa a car crash in Italy sends its victims adrift in time back to 11th-century Tibet where they re-enact the dramatic story of the poet-sage Milarepa. The film shifts from 11th century Tibet to contemporary Italy in a classic sinner/saint tale of a man who overcomes a life of black magic to embrace Buddhist teachings.  As a film, Milerapa continues to be obscure and little seen except on festival circuits.

The handful of Buddhist films that followed it — mostly Korean — also remain little known to a mainstream audience. A pity, since they are such gems. One in particular is extraordinary for its contemplative quality: Bae Yong-kyun’s Why did Bodhi Dharma Leave for the East? (1989). The title refers to a Zen riddle for which there is no answer. Noted painter Bae Yong-kyun devoted several years to “carefully and lovingly creating this challenging, meditative and exquisitely photographed film.”

Buddhism as a philosophy, as a way of coping with contemporary living, had taken hold of the imagination today. Martin Scorsese’s beautifully shot, illuminating film on the early life of the 14th Dalai Lama is a deliberate attempt to make a less Hollywoodised, more authentic film on Buddhism. The script stays close to the Dalai Lama’s point of view: His discovery by Buddhist monks searching for the reincarnation of the 13th Dalai Lama among the farming communities of northern Tibet in 1935; his upbringing and tutelage in Lhasa; through the Communist Chinese invasion of 1950, to his own exile to India nine years later.

Spurred by the interest stirred in Buddhism by Bertolucci, Scorsese and Annaud other Hollywood and international film productions followed with Buddhist-themed films. But only in the last five years have films on Buddhism emerged from filmmakers from the East. Most notably Pan Nalin’s Samsara, (his latest project is a long awaited bio-pic of the Buddha) Khyentse Norbu’s The Cup, Kim Ki Duk’s Spring, Summer, Fall, Winter ...and Spring, Neten Chokling’s Milarepa, and Ritu Sarin and Tenzing Sonam’s Dreaming Lhasa.
The couple have just made The Sun Behind the Clouds, a film about Tibet’s struggle for freedom.

Shot in Ladakh, Samsara is full of spectacular wide-screen landscapes of this Himalayan region. Nalin’s first feature was a huge commercial and critical success worldwide. It won him more than 30 international awards. In The Cup, young Tibetan monks in a monastery in India obsess over World Cup soccer. A brilliant and funny debut by Bhutanese filmmaker, Khyentse Norbu. Several of the actors, such as Neten Chokling, are actually Tibetan Buddhist teachers of note, and the whole film radiates warmth and reality.
Norbu’s last film, Travellers and Magicians is more subtly Buddhist.

Dreaming Lhasa is perhaps the first film to capture both “the majesty of Tibetan-Buddhist culture and the complexity of its ties to the outside world.”

Korean director Kim Ki-Duk is best known on the festival circuit for his studies in violence and cruelty, but Spring, Summer, Fall, Winter ...and Spring is a spiritually austere and deeply involving film. “A young boy lives in a small floating temple on a beautiful lake, together with an elderly master who teaches him the ways of the Buddha. Years later the boy, now a young man, experiences his sexual awakening with a girl who has come to the temple to be healed by the master. The youth runs away to the outside world but his lust turns his life into hell, and he returns to the lake temple to find spiritual enlightenment.”

Milarepa from Bhutan is the second biopic about the poet-monk (1052-1135) who became one of Tibet’s great spiritual leaders. Its director, Neten Chokling, is a Buddhist monk and actor best known for his role in The Cup. Werner Herzog’s documentary, Wheel of Time, “Focuses on the details of two Buddhist events in 2002 — an enormous conclave in India (around the spot where Siddhartha became the Buddha) that draws half a million of the faithful, and a much smaller gathering in Austria later that year. These twin points of contact provide a glimpse of the events’ ritual — mandala making. In the process, the film elegantly sets up a space for contemplation.”

One can even glimpse Buddhist-influenced themes in mainstream films: The Matrix, I Heart Huckabees, Dead Man, and Kung Fu Hustle have plot points whose philosophical premises are evidently Buddhist. Even the famous TV cartoon character from The Simpsons — Lisa — has now declared herself a Buddhist!