The 'Inception' of Illusion or Reality?

Singapore -- The ingenious film that is ‘Inception’ begins with the assumption that it is possible for multiple persons to enter someone’s dream, that can even be designed without that person knowing, thus digging out deep secrets from his sub-consciousness, or even implanting ideas which eventually shape one’s decisions. 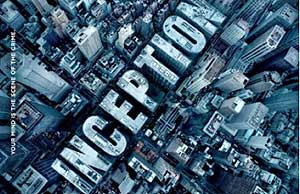 Thank goodness this doesn’t seem technologically viable at the moment… though it does seem possible in the near future? If so, may this movie be a cautionary tale for what may come to be! This is especially relevant in this information age, when the conceiving of the slightest ideas by the powerful can mushroom into world-changing actions.

In the story, dreams are elaborately crafted by architects who have an eye for detail and creativity – so as to trick the dreamer into believing the dream sequences to be real. This reminds me of the Buddha’s teaching in the Diamond Sutra, that all conditioned phenomena (including real life) is dream-like, due to their ethereal and transient nature.

In the Matrix universe, it is possible to die when hooked to the Matrix, when one’s mind is weak enough to experience the illusion of simulated pain as real. In the dream world of Inception however, one cannot die in a dream – simply because it is just a dream. Yet, a dream is never just a dream – especially when it is perceived as reality in the moment. The hackers in the real world are synchronised to awaken together upon accomplishing their missions with a common wake-up call – which is heard as music fed through earphones, that penetrates all the layers of dreams. For a quick awakening, their sleeping bodies are jolted awake by dunking them into water! Almost Zennish – as in the sudden school! Buddhists use realisation of the Dharma as the spiritual wake-up call!

It is also proposed that an idea is the most resilient parasite. As they say, thoughts become words, which become actions, which become habits, which becomes character, which becomes destiny. The Buddha would concur, as he taught that the mind is the forerunner of all things. Ideas clung to can shape reality or sustain delusion. While the hackers admit that it is not easy to plant an idea in someone’s mind without the person realising, an idea that is firmly implanted can be difficult to let go off. Just recall your favourite delusion! Also discussed was planting the essence of an idea as a simple mantra-like phrase, so as to let it grow naturally, as one becomes one with it. What mantras or taglines do you live by? Good ones I hope!

In lucid dreaming, one is mindful enough to know one is dreaming, and is thus able to play with the ‘matter’ in the dream. The possibilities would be limited only by one’s imagination. The more sharp one’s mind is, the more intricately detailed and functional can one’s dream be. This would be control. However, for most dreamers, we are controlled by our delusional thinking instead – both when awake and asleep! The Avatamsaka Sutra says, ‘The mind is like a master painter experienced at painting all sorts of things.’ Inception proposes the same when it says the mind works so fast that it can simultaneously create and perceive scenes in dreams. Despite dreams, and especially dreams nested within dreams being inherently unstable, they can seem so solid due to the power of the mind.

Due to the reality of their imagination being limited, the dream architects use visual paradoxes (such as the Penrose Staircase) to create the illusion of vast or interconnected spaces. Nice touch! We too are already tricked by illusions when awake – what more when dreaming! It is interesting too, that we seldom remember the beginnings of our dreams; as we tend to end up smack in the middle of them. It’s a lot like life too – how we seem to be existentially stranded in the thick of Samsara once we realise we are. What we know for sure is that we do have layers of dream-like delusions to break through, before finally surfacing to reality. Inception offers powerful entertaining and enlightening imagery for this!

The plot suggests a time when those disillusioned with life pay to immerse themselves within dreams. However, if they are in too deep, they risk falling into the limbo of infinite unconstructed dream space. How vaguely reminiscent of the teaching that beings too attached to their deep meditation can be fruitlessly stuck in the plane of ‘neither perception nor non-perception’ for eons! Being an altered state of mind, dream time is substantially slower than that of real life too, which is similar to how meditators who enter samadhi (states of concentration) often lose track of time. ‘Dreams feel real while we’re in them. It’s only when we wake up that we realise something was actually strange.’ Indeed! Insight via hindsight. The enlightened always readily smile when they look back to reflect on how deluded they once were!

While dream architects use their illusions to beguile others, they are also mindful not to lose their grip on reality, to be tricked by their own illusions. This is done by never projecting familiar or common places, which others might have mastery of. Mazes are created too, should their dreams be hacked into by others – so that they know exactly where to flee within them to lose their tails. The lead character however, was so attached to his deceased wife for having ’caused’ her suicide, that she continually appears to sabotage him in his dreams. This is reminiscent of how the wrathful demons of hell in Buddhist cosmology are really manifestations of one’s negative karma and guilt. Because he shared dreams with fellow hackers, his personal delusions threatened their safety too. As in real life, one’s delusion can spill over to harm others too, via the interplay of collective karma.

Severely ‘haunted’ by his wife, he decides that reality is no longer enough, as he creates an addictive dream to imprison his memories of her, in which he tries to create an alternate reality; or rather, alternate delusion. He had experimentally implanted the idea within her mind, that she might be in a dream while she was alive, which became a delusion so firmly lodged that she made a leap of blind faith to death… in order to ‘wake up’.

Buddhism would say she is not gone forever though, as there is rebirth, but the husband clings on to the past version of her to relive their happier days and to make up for his mistakes. This he did, till he realised it didn’t bring him true happiness, as he knew it was an illusion, that continually punished him instead. Dreams then became not as worthy as reality, as he strived to wake up.

As in the Matrix trilogy, the audience is left existentially wondering if this very life is but a dream-like illusion. More perplexing than Zhuangzi pondering if he is actually the butterfly he dreamt, who is now dreaming himself to be a man, we ponder which of many dreams we might be in instead! The hackers each fashion a unique totem for themselves, which they always hold on to – an object, such as a chess piece, that is crafted and weighed in a manner that only one knows.

With it, they would know if they are in someone else’s dream – as another hacker would be unable to create the exact totem. Methinks Inception has a perfect ending… the totem of the lead character, which is a top, spins on, but wobbles a little… and we’re unsure if it will fall. In a dream world, it could spin on indefinitely if one wills it to; in the real world, no top spins forever. An open-ended scene that summarises the state of our uncertain and unenlightened lives!