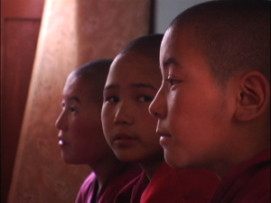 When local photographer Heather Kessinger first traveled to Ladakh, Kashmir on a photo assignment, she was surprised to find herself gravitating towards color images rather than her more familiar black and white.

And when some of those images were selected for a group exhibition in Southern California upon her return, she was even more surprised when she realized, looking around the room, that not a single one of the photographs depicted a female.

"Buddhism," she said, "is almost always reflected in the face of a monk."

Kessinger started looking for images or films with Buddhist nuns, but found instead a gaping hole in the visual representation of the Buddhist religion and culture.

With that discovery, the Marin-based photographer (who has? lived in Mill Valley and currently calls Greenbrae home) began her transformation from artist to filmmaker. In The Shadow of Buddha, Kessinger's film, screened earlier this month at the Smith Rafael Film Center as part of the International Buddhist Film Festival Showcase 2010 and plays the Kathmandu International Mountain Film Festival this weekend.

Once she started investigating, Kessinger was astonished at the absence of female representation in Buddhist culture, art, and media. Though the religion and philosophy have gained a much wider understanding and following in the West over the past several decades, Buddhism still retains a shroud of mystery, particularly when it comes to questions of everyday life and domestic existence.

"I was always interested in the philosophy of Buddhism," she said. "But what I learned was fairly surprising. Tibetan nuns, historically, have always been in service to the monks, working manual labor, or they've remained in their own homes in service to their own families. They didn't have an avenue to education."

This inequity stems from an ancient (and, for the most part, outdated) belief that enlightenment cannot be gained in the body of a woman. Though notions of gender equality have certainly begun to permeate the culture, the physical isolation and rigid, traditional structure of Buddhist culture have made it a slow process of gradual change.

In an effort to give voice to this largely silent community, Kessinger's crafted her film entirely without narration or voice-over. She spoke with a number of Buddhist nuns about their motivations, their goals, and their thoughts on the role of women in their society.

"What I wanted to ask was 'How do you feel about being a second-class citizen?' but that was the West talking… my own assumption of how they should interpret their situation," she said.

Instead, Kessinger approached the question in Buddhist terms, asking her interview subjects how they would prefer to be reincarnated – as a man or a woman. Most people responded that they'd like to come back as a man, but Kessinger found some hope in the fact that both the oldest nun and one of the youngest saw through the question, answering that they'd just like to be reborn as better people.

The last 10 to 15 years has seen a subtle but noticeable shift in opportunities for women in Buddhist society. In larger cultural centers, like Dharamsala, there are nunneries where girls can receive an education, and important figures within the religion are beginning to take note of this issue, albeit very slowly.

As with other cultural and societal shifts, the re-shuffling of gender roles in Buddhism will require leadership and patience. Kessinger was fortunate to connect with Jetsunma Tenzin Palmo, founder of the Dongyu Gatsal Ling nunnery and one of the first Western women ever to be ordained as a Buddhist nun, who also served as an advisor on the film.

Palmo is something of a trailblazer in the Buddhist community, having spent 12 years in a 10-foot wide Himalayan cave, three of which were in silent, meditative retreat. (The story is recounted in Vicki Mackenzie's book Cave in the Snow.) Palmo has been one of the most vocal and visible figures in the promotion of the status of female Buddhist practicioners around the world. She earned the honorific title Jetsunma in 2008 in recognition of her advocacy.

Kessinger's production required multiple trips back and forth to Ladakh, and took around five years to complete. Now that her first film is out, Kessinger is excited and pleased to have it screen at film festivals around the world. The film recently won the Best Documentary award at the Religion Today Film Festival in Italy, and has screened (or will screen) in South Africa, Costa Rica, Santa Fe and possibly Iran.