Where Is Your Hereafter?

Singapore -- ‘Hereafter’ proposes something ‘simple’ yet mysterious. It speaks of the great possibility of existence hereafter, which seems certain to exist, yet being beyond the scope of our clear understanding. 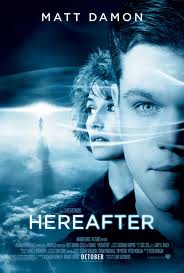 Even the protagonist psychic featured, who is masterful in communicating with the deceased is unsure of where they go to after ‘hanging around’ for a while. In the Buddhist teachings, ‘hereafter’ can be many places indeed, for there are 31 planes of existence, which are more broadly classified into 6 main realms. And there is no fixed hereafter in the ‘forever and ever’ sense, due to the cycles of rebirth and dynamic changes in karma. This is why it takes more than an ordinary psychic to be able to discern the whereabouts of long deceased ones.

While the nihilistically ‘pragmatic’ might feel that the question of what lies hereafter to be the most irrelevant existential question of all, a sound answer does however gives us crucial spiritual bearings. As uttered in the film, ‘a life about death is no life at all’. True, but to really live life is to be concerned with death too, for it puts this short and vulnerable life in perspective.

The Buddha spoke against the erroneous romanticism of the hereafter as eternal nothingness (that’s nihilism), and as eternal heaven or hell (that’s eternalism). Well, the subtle life force that is the consciousness is too powerful to be simply snubbed out at the end of this physical life, and what natural or supernatural justice is there to deserve everlasting pleasure or pain due to limited good and evil done?

The hereafter depicted in the film is one that is supposedly experienced by many – of blurred silhouettes against bright white light. In the Buddhist context, these figures can be other denizens of the in-between, of the weightless bardo state (when the consciousness stripped free from the body), or even the (de)forming manifestations of personal demons and guardians. With many coloured lights representative of various spiritual tendencies, a precarious state this is, as described in great detail in the Bardo Thodol (‘The Tibetan Book of the Dead’). When one follows the lights or beings one is attached to, one would be reborn accordingly. In the Mahayana teachings, the safest way out is to be mindful of Amituofo (Amitabha Buddha) by reciting his name with utmost sincerity, to which he will manifest and lead one to his Pure Land, where enlightenment is guaranteed.

Dying is not universally blissful, as often relayed by those with Near-death Experiences (NDE). If death is always nice, there would be no encounters with woeful wandering spirits! Though there are many culturally conditioned NDE accounts due to collective perceptions, there are many other different ones too. Those with unpleasant experiences seldom return to share them. This is due to the intensity of their negative karma, that barred them from second chances at the expired lives. Perhaps accidentally, the film might promote the use of psychic services to communicate with the deceased. While this can be comforting as a means to relay final messages, it can be dangerous if attachment and regret on both sides of the living and dead is reinforced, which might prevent the deceased from taking a good rebirth. And yes, as the story warns, beware of false prophets, fake mediums and pseudo psychic scientists!

On the science of the afterlife, the recently deceased Dr. Ian Stevenson of Virginia University had meticulously documented more than 3,000 cases of those with recollections of their past lives. Many children were discovered with such detailed memories, which upon rigorous investigation, correspond to persons who lived before they were born. In over 40 cases, there were discoveries of unusual birthmarks and birth defects, which matched post-mortem records of those the children claimed to have been. They even displayed familiar habits towards their previous surviving family members. While playing, many would also incorporate elements of their claimed past professions! Tellingly, they also had phillias and phobias linked to their manner of death.

Curiously, the director Clint Eastwood featured a scene where a boy shook his head upon hearing a preacher say there is nothing to fear about death if one believes in Christ. Perhaps he is open-minded enough to explore the possibility of making his next movie based on the phenomenon of rebirth? Still skeptical of the existence of any hereafter (and the worth of doing good)? Here is a sound fourfold way of reasoning to solve this problem, as advised by the Buddha in the Kalama Sutta. Firstly, if there is afterlife, and if there is the law of karma, you will have a good rebirth if you do good. Secondly, if there is no afterlife, and if there is no karma, you will live happily now, as you are free of ill will (since you do good). Thirdly, if evil befalls the evil, it will not affect you as you do no evil. Fourthly, if evil does not befall the evil, as you do no evil and do good instead, you are pure both ways. There you have it, the very assuring Four Assurances!