Ancient Buddhist grottoes along the Silk Road in western China are magnificent art that show the influence of many cultures over more than 1,500 years.

Shanxi, China --  Walking along spectacular Lifo Avenue, with its 26 marble ornamental pillars, I marvelled at the grand renovations undertaken at the Yungang Grottoes site. Compared with last time I visited nearly a decade ago, the zone has expanded to almost eight times the previous size, adding ancient-style pavilions and temples, a well-equipped exhibition hall and even a castle-style theater that stretches deep underground. 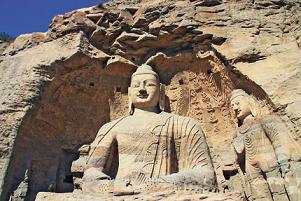 << The seated Buddha in Cave No. 20 is the signature of the Yungang Grottoes.(Photo/Shanghai Daily)

Splendid as the renovation is, I quickly headed toward the grotto complexes. It is only when you see the grottoes stretching before your eyes that you can understand the beauty of Yungang Buddhist art.

In the south cliffs of Wuzhou Mountain west to Datong City, Shanxi Province's second largest city, the grottoes were created in the reign of Emperor Wencheng (AD 440-465) in Northern Wei Dynasty.

They were an attempt at atonement after the emperor's grandfather, Emperor Taiwu, attempted to extirpate Buddhism in AD 445, during a struggle with the Han insurgents. In the turmoil, numerous temples and Buddhist sutras were burned, statues toppled and monks killed.

Monk Tanyao is one of the lucky few who managed to escape. Later when Buddhism was revived, he convinced Wencheng to construct the grottoes.

Today, 45 of more than 200 grottoes in Yungang are open to the public. Most were created before the empire relocated the capital from Pingcheng (today's Datong) to Luoyang in Henan Province in AD 494. While the huge deep caves on the east and middle were ordered by royals, smaller ones peppering the west are folk art from before AD 494. Do take a look at these smaller ones if you have time, you will still find many surprises that make you awed by the folk wisdom of ancients.

Yungang Grottoes stand out among the four main grotto complexes in China, not only for kaleidoscopic carvings of Buddha and Jataka (the previous lives of Buddha), flying deities and musicians and monks but also for blending traditional Chinese carving with Indian Gandhara art.

A gateway to the west, it is where Buddhist grotto art starts to show Chinese characteristics, with carvings of Chinese pavilions and shrines.

Depictions of Buddha also vary: from the early period's simple masculinity; to the details and lavish decoration of the middle period; to later slender, attractive statues, reflecting folk images for immortals. That created a template for grotto art in northern China, that prevailed until the Tang Dynasty (AD 618-907).

It's also a good place to study ancient history, art, architecture and even music - it took me quite a while to identify musical instruments from a group sculpture. Some of them no longer exist.

It's quite amazing that Yungang, built into on a sandstone cliff that is easily weathered, remains a good condition, compared with other grottoes.

Small holes in the statues tell of later renovations. The largest was in the Liao Dynasty (907-1125) when multi-storied pavilions were built on the cliff face, covering the entrance to almost every larger cave, protecting the grottoes from the elements. Renovations also saw parts repaired and the eyes of statues decorated with black glaze.

As with other Chinese grottoes, many caves are scarred by looting by explorers who hacked off parts and shipped them to places such as Japan, France and the United States.

Despite this, Yungang Grottoes remains relatively intact, an enticing gem that continues to beguile millions of visitors every year.Know as the "Five Caves by Tanyao," Cave Nos. 16-20 are the earliest group of grottoes built by Monk Tanyao on Wuzhou Mountain. Each main Buddha statue represents one emperor of the Northern Wei Dynasty (AD 386-534), through to the reign of Emperor Wencheng.

The sitting Buddha in Cave No. 20 is the signature for the Yungang Grottoes, frequently found on postcards and other souvenirs.

The front ceiling of the cave collapsed in early times, leaving the Buddha and the two others at its side in the open air. It has become a popular spot for tourists to take photographs. With a height of 13.75 meters, the Buddha, said to resemble the state founder Emperor Daowu, has a typical look used to represent the strong, tough northern nomads: with a full face; a broad forehead; a high nose bridge; deep narrow eyes; large earlobes; and broad shoulders. This style of figure dominates in early period of the Yungang Grottoes. A strong Indian influence can also be found in the clothing and accessories depicted in the statues and relief sculptures. Buddha often wears a robe over one shoulder, a common style in India. And a seated Buddha at the east side of Cave No. 18 wears a crown decorated with sun-and-moon patterns derived from the Persian Sassanid Empire. A vivid group sculpture of Indian monks also shows the exotic influences from the civilization to the west.

Cave No. 19 creatively set three Buddha statues of the past, present and future in three separate chambers, lending solemnity to surroundings. At 16.8 meters high, sitting Buddha Shakyamuni is the second largest statue in Yungang,

The standing Buddha in Cave No. 18 is based on Emperor Taiwu. His robe is decorated with thousands of Buddhas, implying his regret at persecuting Buddhism.

Emperor Wencheng's likeness is found the No. 16 cave. Unlike his predecessors, he wears a robe covering both shoulders, with a long knot dangling in front. That style resembles the Gandhara-style robe with a deep-V neck that is often seen in mid-period grottoes, and helps indicates these statues were made later.

These five caves are collectively called "Wuhua Caves," - five glorious caves - in recognition of their gorgeous colored paint work in later dynasties over the relief sculptures inside and out.

A peaceful cross-legged Buddha statue sits in Cave No. 13. Holding his left hand in front of his body while resting the other on his knee, the Buddha resembles the fifth ruler of the dynasty, Emperor Xianwen. A stone warrior, said to be his son - the later Emperor Xiaowen - stands on his leg and holds his left arm, both as a support and interesting decorative feature.

Some of these instruments are only found in ancient writings.Numerous relief sculptures of such elegant flying musicians and dancers cover the walls and on the vaults over the windows where sunshine streams in, casting its light over the Buddhas.

Shrine sculpture is another highlight in these five caves, varying in styles and Buddha statues. Shrines come in a number of shapes, including arches, tents or pavilions, while Buddhas sit, stand or cross their legs, a kaleidoscopic depiction of reincarnation.

Cave No. 9 and No. 10 is a double cave; if seen from outside, it has both a front chamber and rear chamber. Double caves in Northern Wei Dynasty can be traced back to Dowager Feng. The widow took charge at an early age of 24, and oversaw an age of suppression.

For 25 years, the empire was held by two "saint" rulers. Therefore, double caves were built to honor these two "saints."On the north wall of the front chamber in Cave No. 10 is a relief sculpture of Sumeru, the mountain that stands in the center of the world, according to ancient Indian mythology. Some 5 meters by 2 meter, carvings include children, deer-like animals, double dragons, the Indian monk Kumarajiva and Deva Asura. On the ceiling of a window over the group sculpture is a blossoming double-petal lotus; as if the shining sun, surrounded by flying deities.

These two caves form the earliest double cave in Yungang, where cultures from the east and India to the west harmoniously set against and embrace each other.

Inside the arch door to Cave No. 8, on the east wall is a relief sculpture of Indian Shiva Mahesvara. Riding on the sacred ox, the three-headed deity holds the sun, and a bow and arrows in his eight hands. On the opposite side is his son, Kumara, with five heads and six hands riding a peacock. The sculptures illustrate how the Yungang Grottoes borrowed and artistically combined elements from different religions and areas.

On the south wall inside Cave No. 7, over an arch door, is a rectangular curtain-shaped shrine, featuring six plump donors in flowing robes. These six donors were extolled by Liang Sicheng - the "Father of Modern Chinese Architecture" - as "the six beauties in Yungang," for their elegant shapes and enchanting smile.

The double cave also features early period flying deities with bright smooth foreheads, round buns and drifting dresses.Posing in a deep-V, the deities looks cute in an endearingly clumsy way.

How to get there:

There's one and only direct flight from Shanghai Pudong Airport to Datong Yungang Airport. Trains running through Shandong and Shanxi provinces, Beijing and Tianjin municipalities and Inner Mongolia Autonomous Region all stop by Datong. Take Bus No. 4, 26, 28 and 17 to Xinkaili Bus Station and change to Bus No. 3 that runs directly to Yungang Grottoes.

The scenic area is open every day from 8:30am to 5pm. Entrance fee is 150 yuan (US$24), with half price admission for students and the over-65s. Tour guides charge 120 yuan, or you can rent an electronic tour device for 100 yuan. This gives detailed explanations in English, French and Japanese.