Riding through the ruins

All the troubles of Sri Lanka disappear the moment you step into Polonnaruwa. Despite being smaller than its more illustrious counterpart Anuradhapura, the ruins here are better preserved and exude peace, writes ANU NATHAN.

Colombo, Sri Lanka -- SRI LANKA, the teardrop-shaped isle just south of India is a land of conundrums. Much of what we hear of the land once called Serendip and Ceylon is negative – from the long-running civil war that seems no where near an end and the devastation wrought by the Dec 26 tsunami in 2004. But as I was to discover, it is a land of such exquisite beauty that you feel like never ending your holiday.

It was with some trepidation that I booked my tickets to Sri Lanka, the land of my forefathers, amid news reports that the island was on the brink of an all-out war again with an attack on the Sri Lanka navy, said to have been mounted by the Tamil Tigers. 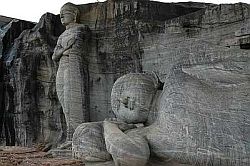 Nonetheless I quelled my fears and made plans to explore an ancient city. I baulked at the one that carried my name – Anuradhapura – and opted for the smaller but no less deserving gem in Sri Lanka’s cultural map, Polonnaruwa.

The town itself is nothing to write home about – the only place worth mentioning here is the Rest House which is run by the tourism department and fills up quickly with geriatric tourists who want to relive the colonial times with a cuppa and cucumber sandwiches for tea.

Instead, you can choose to stay at any of the towns surrounding Polonnaruwa, so we chose Giritale – for its proximity to the Sigiriya rock fortress, the Dambulla caves, the forest reserve and, of course, the expansive ruins of King Parakramabahu I (1153-86).

A short bus ride from Giritale drops you off in front of some rent-a-bicycle shops. Before hopping on a bicycle though, make sure you have a Cultural Triangle ticket (everyone needs tickets, regardless of what the auto-rickshaw (a motorised three-wheeler) drivers say) to enter the ruin sites. 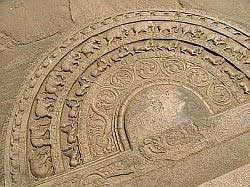 The best bet is a Cultural Triangle ticket which covers Polonnaruwa, Anuradhapura, Sigiriya and Dambulla. It’s a steal at US$30 (RM110) per person, compared to the single-entry charge of US$15 (RM55). Tickets can be bought at the Museum in Polonnaruwa or your hotel can sometimes arrange for the tickets and a guide.

The well-stocked museum also sells bronzes, statues, maps and relics. Being air-conditioned, it is a welcome respite from the afternoon heat.

Then take in a quick cuppa (yes, nothing like Ceylon tea) at the Rest House verandah while gazing at the lake and the plethora of migratory birds on a lay-over as they make their way to the reserve before you stroll back to town to rent a bike.

While most tourists hop on either an auto-rickshaw or get into air-conditioned vans, opting for a bike allows you to see the ruins at your own pace, ditch the pack tourists and follow paths that are too narrow for vehicles. It would be advisable to invest in a guidebook – either Lonely Planet or Rough Guide – as there is scant information at the site.

The ticket does not come with a guide either, but you can always hover on the periphery of a guided tour (although this is not the best option). So on bright fuchsia bikes, complete with plastic flowers on the basket, both my partner and I rode off for a tryst with some of the most amazing Buddha structures in the world.

To the right of the entrance is what’s left of King Parakramabahu’s palace. Opposite it are the royal baths – huge ponds where the king, his consorts and, I was told, the courtesans, bathed in shampoo made of sandalwood and scrubs made from turmeric paste. 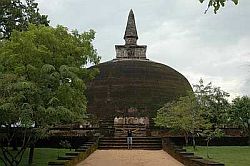 << Dagobas, such as this one called Rankot Vihara, are believed to contain the remains of royals.

It was also here that we met with the downside to Polonarruwa – the incessant pedlars who wanted to sell little elephant carvings, books on Buddha and postcards. I didn’t see a single sale being made that day, and wondered why they persisted.

Hopping back on our bikes, we pedalled fast, leaving the hawkers in the dust as we approached the Quadrangle – a large square of land blocked off by walls, to the left of the entrance gates.

In the centre is the Vatadage, with four seated Buddhas. Entering this sanctuary, where priests used to gather to chant, was altogether a sublime experience, as I, ever the non-believer, suddenly felt calm and relaxed. Maybe it was the Buddha foursome – all were seated in the meditation pose, and looked extremely welcoming.

Also in the Quadrangle is an image house, which once had multiple murals of Buddha, and many little shrines as well as the Hatadage which used to house the Buddha tooth relic, now in the safe confines of the Tooth Relic temple in Kandy. Next to the Hatadage is a 25-tonne stone slab, like our own Batu Bersurat found in Terengganu, documenting the going-ons at the court and extolling the virtues of one King Nissanka Malla. 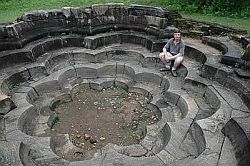 The Lotus Pond is in the northern quadrant of the Polonnaruwa ruins. >>

South of the Quadrangle is the first of many Shiva Devales (temple plots), which houses a Hindu temple, the source of some of the best bronze artifacts in the museum.

The primary attraction of Polonnaruwa lies in the North group – the Gal Vihara. From one large slab of granite, artisans carved four Buddhas (see graphics) – two sitting, one standing and one majestic 14m-long reclining Buddha. The facial expressions on both the standing and reclining Buddhas are almost too real – in fact, the most serene I have ever seen.

Whilst visiting the dagobas (including an imposing 55m high structure), stupas and Buddha statues, it began to pour, drenching us cyclists. But I didn’t mind despite standing shivering under the sloping roof of a gardener’s hut. How unusual. Back in Kuala Lumpur I would have railed against the skies.

When it slowed to a drizzle, it was back on the bikes for the final leg past the huge lotus pond baths to see an almost effeminate Buddha with graceful hips at the Tivanka image house which was once adorned with fine, albeit sometimes titillating frescoes similar to those at Sigiriya. Of this, a few murals have survived. Despite having to adjust to the darkness, we were thrilled to see the shadows of what had once been amazing wall-to-ceiling decorations.

We didn’t have time to see all of Polonnaruwa – that’s the price you pay for going on your own power, but we were not disappointed. What I had seen was enough for a lifetime of memories.

Pay these places a visit

Dambulla is essentially a one horse town and the most striking feature on its landscape is the Golden Temple and the Dambulla Caves. This Unesco World Heritage site has been a sacred pilgrimage site for 22 centuries, and houses the largest, best-preserved cave-temple complex in Sri Lanka. Look out for the ceiling art of Sri Lankan Michaelangelos, as frescoes cover the breadth of the caves. A modern day giant standing Buddha welcomes you to the temple, but even that pales in comparison to the sublime art inside the caves.

Mystery continues to surround this rock that rises out of the ground like Ayers Rock amid lush landscaped gardens which include fountains, tanks (lakes) and terraced water features.

Some say it was the palace of one King Kassapa, who, fearing invaders, built his palace at the top of the monolith. Others claim it was a Buddhist monastery. Nonetheless, there is much to see at Sigiriya from the titillating “cloud damsels” adorning the walls of a cave (accessible via a spiral metal staircase), the well manicured gardens and the rock itself, replete with a true-to-life carving of a lion’s head and paws on its rock face.

A breathless climb leads to the palace at the pinnacle. Let your gaze wander as far as the eye can see and take in the undulating surrounding landscape of coconut palms and padi fields.