BODH GAYA, India -- The road to Bodh Gaya, one of Buddhism's holiest sites, had been long and strenuous. 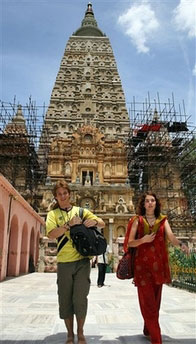 << Tourists walk at the Mahabodhi Temple at Bodhgaya, India, July 5, 2006. For years, those tourists were largely people who grew up Buddhist, often in Japan, Thailand or Sri Lanka. But increasingly, Buddhism's appeal has spread to the West, where the Buddha's teachings about nonviolence and spiritualism have been melded with beliefs ranging from Judaism to atheism. (AP Photo/Prashant Ravi)

Four hours of jolting along potholed roads had taken their toll. My back was sore and I was more in need of spinal therapy than the spiritual therapy that had brought me to Bihar, a poverty-wracked state infamous for its appalling crime and lawlessness.

But my all-too human aches fled when I entered the sprawling silence of the Mahabodhi Temple complex and let the serenity of the centuries-old shrine wash over me.

There, under the canopy of an ancient peepul tree, where the rustling of leaves mingled with the quiet, rhythmic chanting of mantras and the clicking of prayer beads, sat a group of saffron-robed Buddhist monks engrossed in prayer.

The elaborately carved Mahabodhi Temple, Buddhism's holiest shrine and a popular destination for nirvana seekers, marks the site where the prince-turned-hermit-turned-spiritual-leader, Gautama Siddhartha, attained enlightenment some 2,500 years ago after intense meditation.

From then on, he was known as the Buddha, or "Enlightened One."

Today, there are an estimated 360 million Buddhists around the globe.

Bihar is a checkerboard of Buddhist holy sites. A few hours drive from Bodh Gaya is the town of Rajgir, where the Buddha taught and prayed. Nearby is Nalanda, one of the world's earliest universities, which flourished in the 5th century B.C.

The state is also an increasingly important stop for wealthy tourists, many seeking their own, luxurious form of enlightenment.

For years, those tourists were largely people who grew up Buddhist, often in Japan, Thailand or Sri Lanka. But increasingly, Buddhism's appeal has spread to the West, where the Buddha's teachings about nonviolence and spiritualism have been melded with beliefs ranging from Judaism to atheism.

While India's economic boom has spurred economic development in many regions, Bihar has lagged badly, with a state government nearly paralyzed by corruption and mismanagement. Tourists are advised to return to their hotels before dark and to stick to government-licensed taxis and buses to avoid being — literally — taken for a ride.

So while there are glass-walled shopping malls outside New Delhi and high-end spa resorts in India's southern backwaters, much of Bihar struggles with barely paved roads, on-and-off electricity and rampant crime.

That has meant that despite its abundance of Buddhist treasures, the state fails to draw its full share of tourists.

Not that Bihar isn't trying.

While the state doesn't track religious tourists, officials say the Buddhist trail is increasingly hot. Since 2002, when the Mahabodhi Temple was named a World Heritage site, Bodh Gaya has seen a steady rise in visitors. As India's torrid summer gives way to the monsoon rains and cooler weather in October, they come flocking.

"In the fast-paced lives that people lead, increasingly — perhaps instinctively — there is a trend to discover our inner selves. And most of the tourists who come here are doing so in search of that inner peace," said Rama Shankar Tewari, Bihar's top tourism official.

Tourism authorities are trying to cash in with an ambitious tourist campaign, "Come to India: Walk with the Buddha." As part of that, roads are being repaved, museums are being refurbished and public restrooms being built or repaired.

Security around the shrines and monasteries has also been stepped up to ensure that pilgrims are not hounded too much by touts and beggars. Still, most sites have their share of children holding out stick-thin arms and trinket vendors periodically shooed away by security guards.

A year-long celebration of the 2,550th anniversary of the Buddha's death, called the Parinirvana, began in May, but plans to gradually upgrade facilities will unfold over 25 years.

If that seems odd logic — bringing the hedonism of golf to a land steeped in both spiritualism and poverty — Srivastava disagrees.

"While Bihar's rich trove of Buddhist treasures serve the spiritual quest, the average traveler is also looking to relax," he said.

And despite it all — despite the bad roads, the beggars and the trinket-vendors selling plastic Buddha statues, key chains with imprints of the Buddha's feet and kitschy bead necklaces — spiritualism is everywhere here.

"Everyone warned me against visiting Bihar. Even after we landed in India, people kept saying: 'Be careful, it's Bihar.' But our experience has been splendid," said Natalie Halle, a schoolteacher from Valencia, Spain, visiting Bodh Gaya for the second time in as many years.

"The serenity about this place, brings you back, and you forget all the warnings," she said.

A hush descends on visitors when they visit the Mahabodhi Temple, which rises from a gently sloping hollow. White-robed nuns sit cross-legged at the foot of the enormous carved and gilded Buddha statue, reading holy verses in a deep sonorous hum.

The temple and the adjoining Mahabodhi tree, under the shade of which Buddha attained enlightenment, has long been a pilgrimage destination.

Bodh Gaya is also home to dozens of monasteries built and maintained by various Buddhist countries. Thailand's monastery, with its gilded Buddha statues, brilliantly colored wall paintings and rich silken wall hangings offers a contrast to the more simplistic lines of the Japanese temple, or the Himalayan architectural style of the Tibetan monastery, with its carved dragons, pennants and archways.

As I set out from Patna as dawn was breaking one recent morning, the distant purple hills were shrouded in a hazy mist, the road flanked by a patchwork of verdant rice fields dotted with ponds and thatched houses.

My destination was the international World Peace stupa, a shrine a few miles from Rajgir. Access is by an "aerial rope-way" — a euphemism for a chain of rickety bucket chairs strung on a pulley — which takes you to the top of the hill in seven minutes. Otherwise, it's an arduous hour-long trek.

Hundreds of visitors line up each day, many looking more for the rope-way's thrill and the spectacular views than for some sort of enlightenment.

I had a momentary twinge of fear as I was pushed into a chair as it slowed down — barely — to pick me up. But it was a smooth ride to the top.

A leisurely stroll brought me to a sprawling Japanese-built monastery, its wide open doors producing an air-conditioned effect from the sharp breezes that blow in.

"The breeze makes you forget that there's been no power for more than two hours," said G. Okonogi, a Japanese monk who has made the remote monastery his home for over 25 years.

GETTING THERE: You can fly directly to Gaya from New Delhi and Calcutta, as well as from Bangkok, Thailand, and Colombo, Sri Lanka. From the Gaya airport, take a taxi to Bodh Gaya, 7 miles away, where hotels and monasteries abound.

Patna, the state capital, is served by many more flights, but is 85 miles away from Bodh Gaya. Hire a taxi for the nearly four-hour ride from Patna, or take one of the many tourist buses connecting Patna to Bodh Gaya.

ACCOMMODATIONS: Hotels in Bodh Gaya are cheap by Western standards, but while there are clean, efficient places to stay, real luxury is still a few years away. Rates from $54 to as low as $4 a night.

WHEN TO GO: Between October and March.