Hong Kong, China -- THERE are certain things you don't want to hear when you're suspended 50 metres above a mountain ridge. "I heard the opening of the cable car was delayed, for some reason," is one of them. Especially when uttered by a dour Englishman wearing shorts, tan socks and sandals. 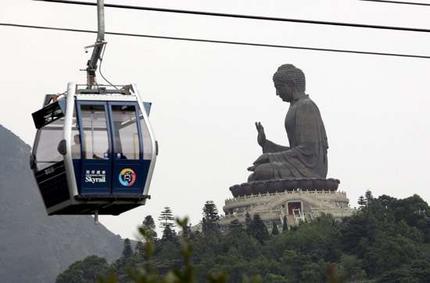 "You could have shared that comment when we landed," I said. He stared, po-faced, and went back to writing his postcard.

I don't know why he wasn't staring outside. Our little cable car was skimming through the air over the blue-green mountains of Lantau Island to Ngong Ping village, Hong Kong's newest attraction.

This is not just a ride in a suspended can. It's a whole package comprising the Skyrail, the village and three interactive activities about the Chinese culture of tea drinking, a children's cartoon show, and the story of how Prince Siddhartha Gautama became Buddha.

The link with Buddha is a genuine one. The cable car is the newest method of transport to one of the territory's favourite attractions, the Tian Tan Buddha statue. Every year, a million tourists toil like ants up 268 stairs to be photographed beneath the elbow of the 34-metre statue and to drink in the misty views of the South China Sea.

Managed by the Australian company that devised the Cairns Skyrail Rainforest Cableway, the cable car towers were built using French and Russian helicopters and Canadian mules, which carried construction materials to the more remote areas.

On paper, each cable car fits 17 people - 10 sitting, seven standing. Surely, it would be squishier than rush-hour on London's Tube, but in its first week of opening, five of us lounged comfortably in the cabins.

Until the cable car opened, the statue and the nearby Po Lin monastery were reached by public bus, which dumps the hapless visitor into a fistful of ramshackle shops selling Mao-pop tat - think Chairman Mao alarm clocks, noisemakers and little outfits that transform Occidental grandchildren into Oriental princes.

The bus is still doing a roaring trade, but the cable car is the way of the future. And instead of the cheap junk shops, we were deposited into an air-conditioned, purpose-built "gift station". We hadn't even visited the mountain and already we were drawn to the postcards, mobile phone danglies and fridge magnets. Paradise, it appears, is entered via a souvenir shop.

The Ngong Ping village is a careful re-creation of a period Chinese village, albeit with lovely cobblestones, a 7-Eleven and a Starbucks as well as the Chinese tea shop run by Stan, an Australian-educated Hong Kong resident with a curious Sean Connery burr, whose hot dining tip was McDonald's. Other shopping experiences (this is Hong Kong, remember) included a camera store, Italian eatery and a bird's nest retailer, which sells drinks, chocolates and even jelly candy, all made from birds' nests.

We visited the Walking with Buddha multimedia attraction, which included a cartoon of a very swarthy, very handsome prince on his journey to becoming Buddha. He looked a whole lot like Disney's Mulan, eagle-eyed and fabulously trim. "So how did Buddha get so fat?" asked my intrepid travelling companion. A sage question indeed, and one left unanswered as we followed Buddha's journey to enlightenment, only to emerge in a gift station.

The next activity was an unscheduled visit to the 7-Eleven supermarket chain. Like Starbucks coffee houses, they are spread over Hong Kong like an infectious red-and-white rash. The sign out the front announced that this is the 600th 7-Eleven in Hong Kong.

But they have their benefits: they are the masters of the quick-and-dirty lunchtime scoff. For $8 the two of us pigged out shamelessly on dumplings, rice flour rolls and some ill-advised pork satay, heated up by a designated microwave oven operator before our next "experience", the Monkey's Tale, a morality story as told by three cartoon monkeys. The kids loved it. The adults loved it. It was beginning to feel a lot like Disney - which, perhaps not coincidentally, is just a fridge magnet's throw away over the mountaintops. Afterwards, we visited a gift station.

Finally it was time for a reality check, so we wandered out of the re-created village and into the real world to visit the Tian Tan Buddha statue nearby.

Even from a distance, the Buddha is massive. The tranquil form is perched atop the mountain beside the Po Lin monastery, which is a good thing because, without it, the Ngong Ping village would feel just a teensy bit fake. We still got a giggle out of the Fat Ho Elderly Centre and wished we'd eaten at the vegetarian restaurant instead of the 7-Eleven, though both are valid cultural experiences.

Stepping inside the monastery complex, incense and the hum of monks hung in the air. Instantly, the world of American coffee and convenience dumplings was dispelled.

Can enlightenment be reached by a cable car? It appears so.

The writer was a guest of Ngong Ping 360