Timphu, Bhutan -- Promoting travel to Bhutan is a contradiction of sorts. Bhutan should be kept a secret from the invasion of tourism that has proved to be both a boon and a bane for most of the world's top travel destinations. Even outer space has fallen victim to commercial tourism, and discerning travellers are demanding more.

<< The courtyard of Thimphu Dzong, the stately medieval building that serves as Bhutan's national assembly and sits on the bank of the river Thimphu.

Bhutan is probably one of the world's last virginal countries still boasting the innocence and pristine beauty that is a rare virtue in this age of global travel. This has been possible due to the kingdom's cautious approach to tourism and strict visa requirements that must be pre-arranged, complete with travel itinerary and accommodation, and paid in advance before you can travel there.

From the airport at Paro, a narrow road took us past clear mountain streams swollen with the summer rain. We were told the rivers were teeming with trout, but fishing is prohibited without a proper license in keeping with the kingdom's conservation policies.

Soon after arriving at the Amankora Paro, we were off to the National Museum, housed in the Ta Dzong (watchtower) which has an eclectic collection of Bhutanese arts and artefacts, including tangas, Buddha images from the local Tantric Mahayana sect, textiles and handicrafts, including the 3-D Apollo stamps which brought Bhutan to the world's attention. 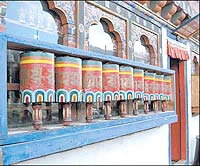 A late afternoon stroll through "High Street" Paro uncovered troves of colourful silks and cottons for the national costume, the kira for women, or the gho for men.

A final stop to round off the day's programme was a visit to Kitchu Temple under the royal patronage of the Queen Mother. The temple claims to have the only orange tree in Paro, and the picking of fruit from the tree is strictly prohibited.

Our group was granted a special privilege to enter the inner sanctum of the temple which is normally reserved for royal patrons. Here, monks performed a solemn life-extending ceremony. After turning the prayer wheels around the perimeter of the temple, we returned to the hotel in time to witness a beautiful sunset over the Himalayan foothills.

The next morning we bundled into vans for a two-hour drive to Thimphu. I have to tip my hat to the drivers: without trying to raise too much fuss, they had to keep an eye on the narrow, winding road and the clock, with a foot on the accelerator, in order to get past the roadworks which slowed the traffic a couple of hours between 11am and 1pm. We made it by a cat's whisker. 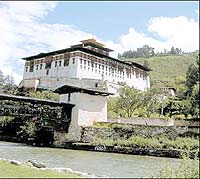 Incidentally, the roadworks are part of a major expansion that will soon mean a four-lane highway connecting Paro and Thimphu. This, and the prevalence of aluminium roofs that have replaced the traditional wooden roof tiles kept in place by rocks rather than nails, are indicators of changes western Bhutan is experiencing in the name of growth and development.

Thimphu, the capital of Bhutan, is the only capital city in the world without any traffic lights. Clearly, there were more private cars on the roads here than in Paro where people still travel in the traditional fashion - on foot.

Some of the main highlights of Thimphu are the Post Office - a philatelist's paradise where the country's picturesque stamps are for sale in endless catalogues.

The Textile Museum of Bhutan has a permanent display of some of the country's most outstanding pieces of handwoven textiles, a handicraft for which the country is most famous. With its elaborate geometric patterns, each kira might take two to three years to weave, and the proud owner will wear it only on the most special annual festivals only.

At the Memorial Chorten - a traditional white stupa which is the final resting place of the previous king's relics - a festival was in progress. The site was crowded with people coming to pray and take advantage of the alms-offering rites, while monks in their distinct red robes chanted prayers.

A visit to Thimphu is not complete with a trip to Thimphu Dzong, or Trashi Cchoe Dzong, a stately medieval building on the bank of the Thimphu River. This is the home of the national assembly and the summer residence of the monastic community. Here is also the Royal Audience Hall where the king receives state visitors. This is also the venue for the famous Thimphu Festival which takes place every year in September.

The dzongs, or monasteries, of Bhutan are a photographer's haven, with their traditional architectural details, the colourful religious motifs adorning every part of the buildings, and the monks - young and old - in their dark red robes and ready smile.

The pure air greatly enhances the clarity of every image and colour, and even the sky is bluer than any other place you've ever been.

We had to drag ourselves away from Thimphu Dzong, only to get ready for our special Matsutake Mushroom dinner at the Amankora Thimphu, another version of the Amankora lodges where we also spent the night. This mushroom is a seasonal delicacy, especially among the Japanese, and August is the time to be in Bhutan if you are a fan of this tasty fungus with its suggestive projectile shape.

The rain from the previous evening continued until the following morning, foiling our plans to trek up to Taktshang Llhakhang, or Tiger's Nest, the cliff-side monastery in Paro where Guru Rinpoche, the father of the Bhutanese strain of Mahayana Tantric Buddhism, was said to have meditated for three months after arriving on the back of a legendary flying tiger a thousand years ago.

We thus had time to see more of Thimphu, stopping enroute at the Takin Reserve to see the country's national animal - the hairy cow with a goat's head - that is on the country's list of 17 endangered animals.

From the top of BBS Tower, you are provided a panoramic view of the valley of Thimphu. This is a favourite spot for locals to put up the ubiquitous prayer flags of different colours based on the element of one's birthday. The prayer flags also signify a sharing of merit with all living beings.

A visit to the School of Traditional Arts, where the seven arts and crafts of Bhutan such as weaving, sculpture, wood carving, metalwork, embroidery and tanga painting are taught in a set curriculum.

Then it was back to Paro to visit Paro Dzong, the 15th century monastery that overlooks Paro valley and is the religious and secular centre of Paro. It is traditional for each family to have one of its member ordained as a monk, the younger the better.

Upon attaining a certain level of religious knowledge, the monkhood becomes their lifetime occupation.

Our four days and three nights there were hardly enough to enjoy what Bhutan has to offer, and suffice to say it only whetted our appetites for more.