Putuoshan, China -- With its mountain scenery and seascapes the island of Putuoshan is like something straight from the pages of a book on Chinese myths and legends, as this scene illustrates. Perched on a headland is a pagoda, its burnished roof glowing in the sun. The hills are clad in rich green forests and waves of chocolate brown water pound the rocky coastline. 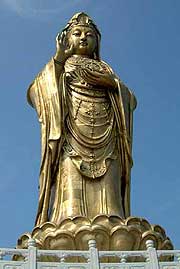 In the distance a monk in traditional robes walks along the beach, while closer by the yellow walls of a Buddhist temple can be glimpsed between the trees. The musky fragrance of incense fills the air and in the temple courtyard the faithful are burning thick sheaves of joss sticks.

Putuoshan belongs to the eastern Chinese province of Zhejiang, a flourishing centre of economic activity, and can easily reached by boat from Ningbo or Shanghai. The journey takes around an hour.

The island is only 12.5 square kilometres (4.8 square miles) in size and can be easily explored on foot in the space of two days. Alternatively, visitors can hop aboard one the many minibuses which regularly ply from one temple to another. There are more than 20 of these to see since Putuoshan is home to the smallest of the four holy mountains of Chinese Buddhism.

A temple tour begins in the heart of the island. There is no doubt about it, the Puji Temple is one of the most magnificent religious relics in the whole of China. Its history can be traced back to the year 916.

The square-shaped courtyards are packed with tourists and pilgrims from all over China along with many visitors from Taiwan, Thailand or Japan. They deposit the smoking sticks of incense in black containers which become so full that flames still lick around the ashes.

Most of the temples are also monasteries where either monks in traditional robes, or more rarely nuns, are instructed in Chan- Buddhism, China's equivalent of Japan's Zen.

Those who have come here for contemplation live in the rear part of the complex, away from the eyes of visitors, who can nonetheless catch a glimpse of a bare-headed monk now and again as he does his washing or gathers in one of the many assembly halls for worship.

As a centre of pilgrimage, Putuoshan has profited from a renaissance of interest in religious faith among Chinese who were prevented from practising their faith by communism.

Only a few metres away from Puji is the next sacred place. The Fayu Temple stands at the foot of the tallest summit on the island, the "foding" or "Peak of Buddhist Top" which stands 297 metres tall. A tour takes visitors past sumptuously decorated rooms, golden statues and the brightly-enamelled figures of grim-faced guardians.

From the Fayu temple pilgrims follow a path of more than 1,060 steps which leads up the peak, or else they take one of the cable cars which operate on the other side. Once aloft, the pilgrims continue their prayers. Clutching joss sticks between their folded hands they ritually bow several times in all four directions of the compass.

The Chinese are very pragmatic about their religion which is often a synthesis of Buddhist tradition with elements of Taoism and Christianity given equal weight. Sooner or later most visitors find themselves fascinated by the atmosphere of spirituality which pervades this island.

According to a local proverb, there is a temple on every corner and should the visitor stray from his chosen path he is bound to encounter a helpful monk on the way.

For more information contact the Chinese Tourist Board at Internet: http://www.cnto.org/aboutchina.asp.