Kathmandu, Nepal -- Boudha near Kathmandu is famously known as Little Tibet. It is one of the top tourist spots in the world, located around five kilometers northeast of Nepal's capital city on the old road from Tibet. 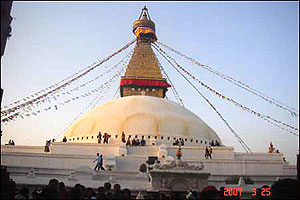 Boudha gets its name from Boudhanath, one of the largest stupas in South Asia and a UNESCO world heritage site. White and looming 36 meters in height, Boudhanath has become a focal point for tourists and Tibetan Buddhism in Nepal.

The main stupa is surrounded by a path which is now itself surrounded by a tight circle of buildings. The area surrounding the stupa is fast urbanizing and numerous modern gompas (Buddhist temples) have been constructed, which has put a great pressure on conservation efforts.

The general belief is that the stupa was constructed in the 5th century CE, however there is no definite proof.

Boudha Stupa stands upon a three layered pedestal, having the shape of a Mandala, and we can easily go up to the dome by taking a flight of stairs.

A ring of 108 images of Amitabha surrounds the base of the dome. A brick wall containing five groups of prayer wheels encircles the dome and there are several chaityas.

There is one legend about how the Boudha stupa came to be built on such a big scale. A female devotee of Buddha asked the then valley king to donate the land for building the stupa. She told the king that she needed the land covered by one buffalo skin. When he gave her permission she tricked him. She cut a buffalo skin into thin stripes and circled off the ground. The king had already granted her wish, so he had no other choice than to give her the land.

The stupa's white dome is topped by a square structure, the four sides of which each has a pair of eyes with a strange nose below. Each square is topped by 13 conical rings, each smaller than the one below. According to the Mahayana Buddhist sect, the 13 rings represent the 13 heavens. Just above these rings there is a parasol commonly called Gajur.

Though Boudhanath stupa is in Nepal, the chief priest is from China and is known as Chiniya Lama. He belongs to a family of Lamas and is considered the head of Gyang Guthi.

It's said that the connection of Tibetans with Boudha probably goes back to the 13th century CE. Later, when Tibetan refugees and other migrants entered Nepal from Tibet in 1960s, many of them decided to settle around the edge of Boudhanath. They set up many Gompas and the Little Tibet of Nepal was born. This little Tibet is one of the best places to observe the Tibetan lifestyle.

Monks walk decorating themselves with maroon robes. Some Tibetans walk chanting "OM MANE PADME" with prayer wheels in their hands while some go round the stupa on their hands and knees, bowing down to Boudhanath.

Every year, Loshar heralds the beginning of New Year, its most important festival. In the festival of Buddha Jayanti both Hindus and Buddhists from other regions flock to Boudha.