A haven of peace amidst the clouds

Genting Hinglands, Pahang (Malaysia) -- FROM humble beginnings where earth was dug up with bare hands, the Chin Swee Temple stands tall today with intricate carvings decorating its walls and statues of the various Buddhist deities. 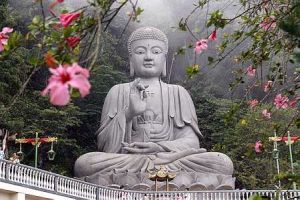 << Serene sight: A large statue of Buddha at one corner of the Sky Terrace.

Tan Sri Lim Goh Tong found the temple site in 1966 after he got an inspiration from the Chin Swee Deity to press ahead with the development of Genting Highlands Resort.

The story goes that Lim, who was building the road leading to the hill resort then, chanced upon the serene rocky slope covered with green tropical vegetation dotted with flowing streams, which was very similar to the holy Chin Swee Crag back in his home Penglai Village (now a township) in Fujian, China.

Since his youth, Lim had watched his parents and relatives pay their respects to the Rev Chin Swee and have their prayers answered and Lim would continue the tradition.

The temple was not easy to construct due to the steep and rocky terrain, making it difficult to bring in modern machinery to do fundamental work such as piling.

Having built his resort in 1975, Lim turned his efforts and tenacity towards the construction of the temple, with Lim and his men manually digging holes of 80 to 100 feet in depth to lay the foundation.

It would be 18 years later before the first part of the temple, which houses the main altar, would be complete and opened officially on March 29, 1994, by Tun Dr Ling Liong Sik.

The temple’s original structure stands till today with its tall red columns and supporting ornamental roof, built at an estimated cost of RM12 mil.

The exterior wall carries many inscriptions that depict the life of the Rev Chin Swee and his major charitable and supernatural works, while the entrance is guarded by four stern-looking celestial general statues.

Inscribed upon the walls along the old pathways leading to the temple are 24 lessons of being filial to one’s parents. 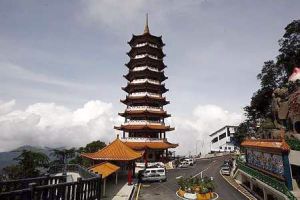 Welcome sight: The Pagoda is the first thing visitors notice when entering >>

The view of the grand old temple is mostly hidden from view, having become an inner sanctum surrounded by other structures that have been artistically and beautifully designed around the original structure.

The new structures were part of an expansion project that started on Oct 13, 2005, and were completed on Jan 18 this year at the cost of RM38 mil.

Greeting visitors now is a nine-storey Pagoda decorated with many figurines of the Buddha where 10,000 blessing lamps were installed for devotees to offer their blessings. There are only 2,000 lamps left for those who would like to dedicate their blessings.

From the Pagoda, visitors are directed to the large square aptly named Sky Terrace, where a breathtaking view can be seen when the skies are clear and a serene surreal image when misty clouds blanket the mountainside.

It is also at the Sky Terrace where some of the new attractions are in place, like the large white statues of Buddha and Kuan-yin.

Of interest to visitors is the pathway that depicts the 10 chambers of Hell. This is one walk that is not for the fainthearted, as the statues depicting the punishment from each chamber are rather graphic.

The reason for the graphic display, however, is to teach devotees the kind of punishment that awaits them should they commit sinful acts in this life. << A sense of calm: The temple grounds are the perfect setting for a peaceful stroll.

At the end of this frightful journey is the depiction of heavenly spirits that mankind ascends to if their deeds were just and good in this life. The pathway is designed to be without stairs to enable the disabled to admire the display.

The senior Lim is recognised with a statue at the square for his philanthropic contributions towards the founding of the temple.

Part of the refurbishment exercise was also to turn the temple into a place of retreat and prayers for more devotees, hence the construction of the 110-room Tan Sri Lim Goh Tong Hall.

The hall is designed much like a hotel complete with a vegetarian restaurant, but details of managing the place are still being negotiated.

Other details that are being ironed out before the temple is fully opened include the cable car service that will stop over at the temple when it is realigned.