It is said that if the Buddhist murals at Dunhuang’s Mogao Grottoes were joined together, they would stretch for 30km.

Dunhuang, China -- I LOOKED out the window of the train to see the pale glow of the sun rising in an insipid grey sky. We had boarded the train at a station an hour’s drive from Turpan the night before and had been travelling for nine and a half hours. 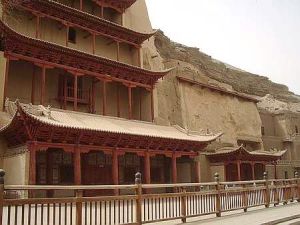 Now we had reached the fringes of the Gobi desert in the extreme north of Gansu province just across the border from Xinjiang. And if ever there was a place called “middle of nowhere” this was it.

It was still dark at 7.30 in the morning in these western regions of China. The terrain outside was bleak and inhospitable, with piles of rock and gravel scattered among barren hillocks. The desolate topography reminded me of a moonscape and was clearly unfit for human habitation.

Half an hour later we arrived at Liuyuan, a modest town of 50,000 people from which we would proceed to our final destination of Dunhuang. We stepped off the train into the biting cold, met up with our Gansu guide and headed to a local restaurant for breakfast. As we were consuming our wheat porridge, pickles and steamed bread, she declared: “I am a Han and not a Hun”.

After several days among the minority peoples of Xinjiang, some of whom are descended from the Xiongnu (Hun) tribes of ancient times, we were finally back in a province where China’s Han majority constituted more than 90% of the population.

The 120km stretch of highway between Liuyuan and Dunhuang cut arrow-straight across a desert landscape not much different from what we had seen from the train window, until finally we reached Dunhuang, home of the Mogao Grottoes.

Mogao, a Unesco World Heritage Site, is one of the three largest and most well-known Buddhist grottoes in China. While its “sister” grottoes of Longmen and Yungang are known for sculpture, Mogao is the repository of some of the most fabulous Buddhist frescoes ever created and we had travelled 750km from Turpan, through mountain and desert just to have a glimpse of its wonders.

As at the Terracotta Warriors Museum in Xian, the grounds of Mogao are extensive and obviously designed to receive thousands of visitors. Our guide, a curator with the Dunhuang Academy which is responsible for the conservation and management of the grottoes, said: “In the high season from May to October, visitors get at most 20 to 30 minutes to view the few caves open to the public.” So we were fortunate to be able to spend over an hour with her as she took us through eight or 10 caves and gave a mini-lecture on the frescoes and sculptures in each of the grottoes.

The earliest caves at Mogao date back 1,600 years, and work on the several hundred grottoes continued for another thousand years. The caverns are kept under lock and key and only open to visitors accompanied by staff of the academy.

To protect the delicate murals, the grottoes have no lighting and we were asked to bring along flashlights, whose diffused beams revealed cave walls densely covered with colourful paintings of scenes from the Buddhist scriptures as well as of the devotional acts of emperors through the ages.

In one of the caves, a Buddha nicknamed “Mona Lisa” sat in meditation with a vaguely familiar smile. In another, a charming scene depicted Emperor Wudi sending Zhang Qian off to the western regions.

Several hundred years before the grottoes were created, Dunhuang was already an important military garrison for Wudi’s campaigns into central Asia. Wudi’s court historian Sima Qian recorded in the Shiji that General Li Guangli and his commanders set off from Dunhuang with 60,000 troops, 30,000 horses, 100,000 oxen, and thousands of donkeys and camels for their successful second mission to Ferghana, which yielded over 3,000 blood-sweating “heavenly” horses for their Emperor.

Unlike the Longmen Grottoes of Luoyang, the caves of Mogao were largely spared the ravages of the Cultural Revolution. But nothing protected them from the vandalism of western and Japanese treasure hunters in the 19th and early 20th centuries. The curator said many sculptures as well as a large portion of the 50,000 manuscripts and paintings from the hidden Library Cave, many dating back over a thousand years, were lost.

Dunhuang sits at the northern end of Gansu’s Hexi Corridor where the old Silk Road divided into the northern and southern routes and through which merchants, military, monks and emissaries made their way to the western regions. These travellers sponsored murals and sculptures at Mogao, donating lavishly to ensure a safe return from their treacherous journey or, upon their return years later, to fulfil a vow of gratitude.

As I stood in each dim cave, I could not help but marvel at the intense fervour and devotion, or perhaps the fear of the unknown that inspired them to sponsor these extraordinary grottoes.

---------
Ziying travels frequently to China in support of a school in a rural village. The country’s rich culture and history are her lifetime passion. She can be contacted at ziyingster@gmail.com.