SEOUL, South Korea -- Anyone who has visited South Korea will have been impressed by its integration of modernity and tradition. If Seoul is a symbol of modern Korea, Geyongju represents ancient Korea and mainstream traditional culture. 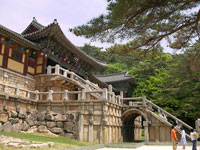 Gyeongju, which lies in the eastern part of South Korea, is famous for its history of more than 1,000 years, especially as the capital of the Silla Dynasty (57 BC-935 AD). The Silla kingdom arose at the turn of the 1st millennium and ruled most of the Korean peninsula from the 7th to the 9th centuries.

The Gyeongju Historic Areas contain a remarkable concentration of outstanding examples of Korean Buddhist art in the form of sculptures, reliefs, pagodas, temples and palaces of diversified styles. They exhibit a unique artistic expression in particular between the 7th and 10th centuries. Gyeongju is therefore regarded as the symbol of ancient Korean culture and heritage; a saying goes that if you go to Korea without visiting Gyeongju your understanding of the country will not be complete.

Gyeongju was designated a World Cultural Heritage site by UNESCO in 2000 because of its many ancient relics. While visiting the area it is easy to become completely immersed in history. It is said that a trip to Gyeongju satisfies all five senses: looking at historic spots with the eyes, smelling the fragrance of the 1000-year-old culture with the nose, tasting traditional dishes with the tongue, listening to the area's history with the ears and feeling the charms of the old capital with the heart.

Mt. Namsan is called an open-air museum by the Koreans. Several hundred relics of wood and stone, including temples, pagodas, grottos and statues, are scattered over about 40 valleys and the mountain ridges. Namsan is a holy place to Buddhists. In ancient times it was considered a guardian mountain to protect the people against invaders from Japan.

The Bulguksa Temple is situated on the southwest of Mt. Tohamsan. It is a temple of refined beauty, built in accordance with the tradition of maintaining harmony with the surroundings.

The Seokguram Grotto is an artificial grotto made of granite. An ancient Korean document highly praised it, describing it as silk made of stone. There is also the Seoak Seowon, a private Confucian Academy in the western suburbs of Gyeongju, built in 1563 to train officials. In addition you can explore Confucian culture at the Wolseong Yangdong Folk Village and Oksanseowon, another Confucian Academy built in 1572.

In Sandong you can visit a fortress called Myeonghwalsanseong, built earlier than 400 AD, when Silla's fortification techniques were exported to Japan. The Wolseong vicinity contains many interesting historic spots, such as Wolseong, where the palace of the Silla kingdom is located, and Gyerim, a forest where Kimalji, the founder of the Gyeongju Kim clan, was born. You can also see a mysterious pond called Anapji, which is said to be the oldest observatory in the Orient.

The Daereungwon vicinity is special for visiting ancient tombs. Huge rounded mounds housing the tombs of kings, queens and noble families could be seen everywhere. They are divided into districts and surrounded by many myths. In downtown Gyeongju you can visit Hwangnamri Gobungun Tomb Park, the biggest tomb site in the area.

Silla culture is also revealed in the temple sites. In Hwangnyongsa and Bunhwangsa are the sites of two huge temples that were later entirely destroyed by Mongol invaders; however you can see more than 40,000 relics collected from excavations.

Worth mentioning is the Gyeongju National Museum, with 3,000 national treasures on display, including gold crowns, Buddhist bells, gold swords, and statues of soldiers on horseback.

Gyeongju shows another face of Korea's integrated identity; it captures the glorious image of the country's ancient heritage and holds the essence of Korean culture and values, which are still part of modern life. The city helps explain the uniquely Korean attributes that have enabled the country to keep its culture even while shaping itself into a modern, dynamic player in this era of globalization.