LHASA, China -- Three crimson-robed monks chant quietly as they file through the ancient palace, pausing every now and then to pray in the candlelit rooms filled with Buddhist statues and religious murals. 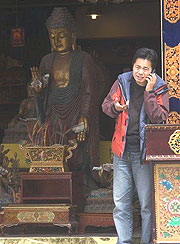 At the Potala Palace, the mountaintop Tibetan landmark where the Dalai Lama lived until he fled to India in 1959 to escape Chinese control, they are in the minority.

A year-old rail line linking Lhasa, capital of the remote Himalayan region of Tibet, with the rest of China has brought a deluge of Chinese tourists. Once quiet, holy sites are now filled with sightseers, many of them trailing behind guides loudly explaining their cultural significance.

"In the past, this was a very comfortable place to come for Buddhists. You could see a lot of lamas and Tibetans in this place and it made you feel like this was a place for your faith," monk Renzin Gyaltso said as he strolled down a stone path at the Potala Palace.

Tibet's Buddhist culture, often besieged in the past half-century of Chinese rule by religious restrictions and communist political movements, is facing a new threat: mass tourism.

Pilgrimages to sacred sites are an integral part of Tibetan Buddhism. Renzin Gyaltso, 29, has visited the sprawling Potala Palace 14 times since joining a monastery as a small boy.

"Now I feel sad when I come here because I cannot see any good people, I can't see any people wearing lama robes. You can't see anything special, they all look the same," he said of the tourists, dressed in fleece jackets and sneakers.

The Dalai Lama has warned that Tibet's religion and culture are imperiled as he travels the world meeting heads of state and drawing harsh rebukes from China.

"Every year, the Chinese population inside Tibet is increasing at an alarming rate. And if we are to judge by the example of the population of Lhasa, there is a real danger that the Tibetans will be reduced to an insignificant minority in their own homeland," he said when accepting the U.S. Congress' highest civilian honor in October.

Few government plans have succeeded in bringing Chinese to Tibet like the "Sky Train," which has become a popular alternative to expensive flights or long, bone-crunching bus rides.

Beijing wanted to build a railway to Tibet for decades but was put off by engineering challenges. The project launched in earnest in 2001 and the train began running in July 2006, on a specially designed track to protect the delicate permafrost that lies under much of the last third of the rail line.

According to government statistics, 3.2 million tourists visited Tibet in the first nine month of this year, an increase of 67 percent over the same period in 2006. The figure—2.9 million Chinese tourists and 326,000 from overseas—is 710,000 more than the total number of visitors for all of 2006.

"There's been a dramatic increase in tourism generally since the opening of the railway," said Kate Saunders of the Washington-based International Campaign for Tibet. "It's been particularly acute at the major sacred sites ... the sites that are most important to Tibetan heritage."

In addition to the 7th century Potala Palace, tourists in Lhasa pack the Jokhang Temple Monastery, the most sacred of Tibet's temples, and Norbulingka, the Dalai Lama's former summer palace.

Colorfully dressed pilgrims prostrate themselves over and over in the square outside the Jokhang Temple, which is crowded with a gumbo of Tibetan herders, Buddhist monks and wide-eyed tourists. Vendors at cluttered stalls hawk handmade jewelry, prayer flags and Buddha statues carved out of orange-tinged yak bone.

Inside the temple, mostly Chinese tourists crowd a large hall filled with rare religious statues, including a life-sized representation of Buddha Sakyamuni as a 12-year-old. At least three different tour guides are shepherding their groups through the room, lit by bare bulbs, as temple workers keep watch.

"As a Tibetan monk I feel especially happy to see that so many people are so interested in Tibetan culture, the splendid culture," said Ngawang Choedra, director of the temple's management committee.

But "it is a contradiction," he said, "on one hand to protect the cultural relics and on the other hand to let (tourists) visit Jokhang Temple in an orderly fashion."

The number of visitors has doubled or tripled in the year since the railway opened, he said. The temple now gets about 2,500 visitors per day, in addition to the five or six thousand pilgrims who come to pray.

To handle the crush, the temple administration has drafted a plan to cap the number of tourists per day. The admission fee, which used to be a few cents), has climbed to more than $9.

At the Potala Palace, the number of visitors per day is limited to 2,300, said the director of the management committee, Champa Kesang.

"The limitation is to better protect the structure, the architecture of the Potala Palace. The palace was built on the Red Mountain ... of wood and earth," he said.

Most of the tickets—1,600—are allocated to tour groups. Others who want to see the palace must arrive early to get one of the remaining 700, and the line begins to form more than nine hours before the ticket office opens.

The rush of tourists, most of them Chinese, is a sensitive issue.

Since communist troops took over Tibet in 1951, ordinary Tibetans have often felt under attack. To exert control, Beijing destroyed monasteries and at one point banned religion.

In recent years, Beijing has focused on spurring economic development to tie Tibet more closely to China. That effort has drawn criticism from some Tibetans and their supporters abroad, who claim that Tibet's rich spiritual culture is being diluted.

Many visitors are awed by Tibetan culture, saying it's "more holy" than the rest of China.

"When you go to the Potala Palace and the Jokhang Temple, there are a lot more pilgrims praying and that type of thing, whereas when to went to the temples in China, it was a lot more obvious it was just a tourist attraction," said Carmen Elmasry, of Toronto.

Renzin Gyaltso, the monk visiting the Potala Palace, said Tibetan culture needed to be protected, but did not seem to be worried about it ever being wiped out.

"Our culture is Buddhism. Tibetans are all loyal to Buddhism. There is nothing else. It will never be broken, it will always be here," he said.

DOCUMENTATION: Foreigners must obtain a visa to visit China as well as an additional permit for visiting Tibet. A number of travel agencies outside China offer packaged tours that include train tickets and the necessary permits. Web sites with information include http://www.lonelyplanet.com/journeys/feature/ts2/article/tibetfaq—0707 and http://en.tibettour.com.cn/. The China National Tourist Office - http://www.cnto.org or 888-760-8218 - can help locate a tour operator to arrange the trip.

TRAIN TO TIBET: The Beijing-Lhasa trip takes about 48 hours. One-way tickets range from about $50 for a seat to $170 for a bunk in a four-bed cabin. Tickets can be harder to obtain heading into Lhasa than leaving Lhasa, especially in peak summer season; as a result, some travelers fly to Lhasa and take the train back.

-Lhasa is located at about 12,000 feet, or more than two miles, above sea level. Altitude sickness is common among visitors. Some hotels sell oxygen and have doctors on call. Tourists are advised to bring extra water and high energy snacks, along with basic medications for headache, diarrhea and minor ailments.

-The disk drives of some laptop computers and other portable electronic devices may crash at high altitudes and data could be lost.