Holding on by a hair

Myanmar has some of the world's most priceless Buddhist treasures, including the incredible, gravity-defying Golden Rock atop Mt Kyaiktiyo

Yangon, Myanmar -- Getting to Myanmar's Buddhist attraction, the Golden Rock, is no stroll in the park as it involves a five-hour drive from Yangon. But the journey by bus is pleasant enough as we take in scenes of white egrets catching frogs in green rice fields with golden stupas in the distance and mountains further yonder. 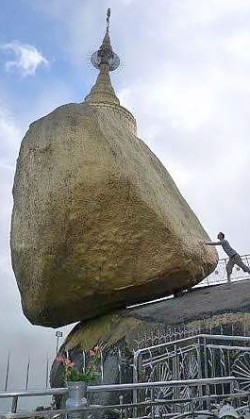 << Push, and the Golden Rock will not fall.

The Golden Rock is 1,100m above sea level, meaning your coach will have to stop at the Kin Pun base camp because of the steep slopes ahead. From Kin Pun, it's another 10km to the peak of Mt Kyaiktiyo, and this is where the fun begins — tourists, locals and monks alike have no choice but to take the open-deck lorries that ply the route at irregular intervals.

The well-worn vehicles have seen better days and may look like they could fall apart any minute but like the Golden Rock, they are apparently resilient. Each can carry 43 passengers, a feat made possible by squeezing them like sardines six per row.

Luggage and bags are thrown into iron containers jutting from the back. Seats next to the driver cost extra since — unlike the arrangement at the back — they provide shelter from the elements.

"The lorries are not allowed to have roofs and there are two checkpoints where guards count the number of passengers to prevent over-loading. As a result, the safety record is perfect as there have been no accidents," explains my guide Winn Aye.

Passengers have to wait till the lorry is full before it departs to maximise returns. I did not dare look at the tyre threads but they gripped the ground well enough to carry us without a hitch. The 10km trip is reminiscent of the road to Genting Highlands but there were a few drastically steep inclines and several hairpin bends that made me close my eyes and think of the Buddha.

Finally, we reached a point where even the sturdy lorry could go no further, and the Golden Rock was still 1km away! There was no choice but to resort to foot power — yours or someone else's!

Depending on your level of fitness, the hike should take 25 to 45 minutes but I decided to take the easy way out — being carried up by four Burmese men! This could well be the only place where you can enjoy the strange, other worldly thrill of being carried like a king or a queen in a makeshift sedan consisting of two long bamboo poles carried by two men in front and two at the back.

The ride is very comfortable but you do feel sorry for your carriers who heave and puff with the exertion and are forced to move the pole from one shoulder to the next at regular intervals. The cost of this return ride is US$20 (RM70) — US$4 (RM14) each for the four men and $4 for the co-ordinating agency.

The men are forced to take at least one (or two if you are overweight!) stop, which, conveniently enough, is in front of a stall whose operator will cajole you into buying them Coke or Red Bull.

You're not obliged to do so, but if you do, each can will cost you US$3 (RM10.50). You will also notice that your four carriers do not drink but just pocket the can. They will resell them back to the vendor for US$1 (RM3.50).

Hey, they deserve this and more for such backbreaking, hard labour.

Like most tourists, I paid them an extra US$20 and bought them four cans of drink in order to improve my karma, lest I come back in my next life as one of them.

Your suitcases are carried separately by a porter with a large rattan basket on his back. The sight of a scrawny, wiry teenager carrying your luggage like a backpack is also sobering, and you will be happy to pay US$8 (RM28).

Your destination atop the mountain could not be more spectacular — a single, huge granite boulder perching precariously at the very edge of a cliff! The Golden Rock looks as if it could roll down the mountain if you so much as huffed. But considering that earthquakes are not alien to Myanmar, this 50ft (15m) high boulder is a pure miracle, especially with the 5.5m stupa on the top.

Legend has it that the rock is held in place by a single strand of the Buddha's hair!

It is said that the Buddha, on one of his visits to earth after attaining Nirvana, gave a hair strand to Thaik Tha, a holy man, in the 11th century. Another version says the hermit met the Buddha when he was alive in 500 BC, and that Thaik Tha kept the Buddha's hair inside his hair knot.

The hair kept the hermit alive for 1,500 years but he eventually yearned for release. Thaik Tha gave the hair to his godson King Tissa with the instruction that it be enshrined atop a boulder in the shape of the hermit's head. As Thaik Tha removed the Buddha's hair from his bun, he aged rapidly and died within minutes.

King Tissa, the son of a zagwi (magical being) and the Dragon Princess, asked his mother to send giant rocks from the seabed on a flying ship to the mountain top. One of them proved ideal as it was shaped like the dome of Thaik Tha's head. Using magical incantations, King Tissa placed the rock at the edge and secured it by putting the Buddha's hair on the top beneath a small stupa.

This became the Golden Rock while the ship carrying the rocks was transformed into stone and remains today at the entrance.

The stone entrance does indeed have a ship's silhouette, though at 3m long it must have been some ship to be able to carry the rock.

"Er, it has shrunk in size over the ages," the guide explains, pointing to many similar looking boulders scattered in the vicinity.

"These were the rocks rejected by the king!" exclaims Winn Aye.

Scientists have discovered that these rocks originated from the seabed. They ended up on the mountain slopes due to volcanic activities, geological upheavals and tectonic plate movements, but, of course, the locals know better!

Incredibly, the base on which the Golden Rock rests is not attached to the mountain side as assumed but is separated from it by around 1m. This can clearly be seen from the viewing platform below.

"The Golden Rock actually rests on top of a narrow pinnacle which already shows signs of cracking!" says Winn Aye, pointing to several dark, ominous lines. "But the Buddha's hair will guarantee the rock stays like this for eternity."

The Golden Rock is not made of solid gold despite its colour because its shine is due to the thick layers of gold leaf pasted on by worshippers.

I touched and pushed the rock. Woah. Was it my imagination or did it wobble ever so slightly? I stopped lest I ended up committing the ultimate sin of sending the Golden Rock tumbling 3,400ft (1,036m) into the valley below!

Walking on the small platform was a feat as I was in perpetual fear of slipping and falling off the cliff. This is not the place for vertigo sufferers.

Call me a superstitious fool but I'm convinced that it really is a single strand of the Buddha's hair that is preventing the boulder from rolling down the mountain. From whichever angle one looks, the rock appears as if it's in the midst of falling.

It is said that a menstruating woman would undo everything, hence women are forbidden from touching the Golden Rock.

Whether pre-teen or wizened old dame, no females are allowed entry. Several armed guards at the entrance make sure no feisty woman attempts the forbidden.