HAILEY, Idaho (USA) -- With his amplified words bouncing off the mountains surrounding Sun Valley, the Dalai Lama told a crowd of about 10,000 people Sunday to fight violence with peace and poverty with compassion. 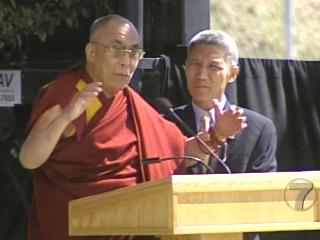 << The Dalai Lama brought a message of peace and compassion to Idaho on the fourth anniversary of the Sept. 11th terrorist attacks on the U.S.

The wide-ranging address by the spiritual leader of Tibetan Buddhists touched on the Chinese occupation of his homeland, the fourth anniversary of the Sept. 11 terror attacks and Gulf Coast hurricane destruction.

The Dalai Lama brought the crowd to giggles with his mix of one-liners and a look of good-natured surprise.

The 1989 Nobel Peace Prize winner - for his advocacy of nonviolent resistance to China's occupation of Tibet, from which he's been exiled since 1959 - urged victims of the Sept. 11 attacks and Hurricane Katrina to turn their tragedies into something that makes them stronger.

"Your sadness, your anger will not solve the problem," the 70-year old monk said. "More sadness, more frustration only brings more suffering for yourself."

The speech was televised live on CNN.

As he condemned violence, the Dalai Lama acknowledged conflicted feelings over the U.S. invasion of Iraq, telling reporters at a news conference following his hour-long address that "history would decide."

His speech came on a day when many Americans were reflecting on the terrorist attacks of Sept. 11, 2001, and on the intervening four years in which nearly 1,900 American troops have died in Iraq and more in Afghanistan. In Washington, D.C., an estimated 15,000 people marched from the Pentagon, site of one of the 9-11 suicide attacks, to the National Mall in support of more than 100,000 troops abroad.

"Violence is unpredictable," said the Dalai Lama, who has won support from the Bush administration, including Secretary of State Condoleeza Rice, for his campaign to restore Tibetan political autonomy. "In the case of Afghanistan, perhaps there's something positive. In Iraq, it's too early to tell."

The Dalai Lama came to Idaho at the invitation of wealthy financial consultant and Buddhist Kiril Sokoloff, who has raised thousands of dollars for Tibetan school children.

Three more days of events were planned in Sun Valley, including an invitation-only address Monday morning to business and financial professionals. At 2 p.m. Monday, he's due to speak to thousands of Idaho school children at a gathering organized by Gov. Dirk Kempthorne.

Asked why he brought the Dalai Lama to Sun Valley, Sokoloff said he relied on knowledge from the financial world - his Boca Raton, Fla.-based company, 13D Research, publishes a stock-market newsletter - to determine the timing was right.

"I've had a powerful vision for the past two years that we are at a pivotal moment in history," Sokoloff told the crowd. "The Dalai Lama has joined us for one specific reason: To show us the way to the tipping point for global compassion."

Much of the audience seemed to agree, as they interrupted the speech by the Dalai Lama - the title means "Ocean of Wisdom" - with polite and frequent applause.

The Dalai Lama arrived at Wood River High School in a white Chevrolet Suburban. He wore a traditional maroon robe trimmed in vivid yellow and was flanked by four similarly dressed monks, all with shaven heads.

He repeatedly poked fun at himself, and at some of the questions he was asked in an informal Q&A session following his address.

Asked what the secret to compassion was, the man whose worldly name is Tenzin Gyatso looked at the container he was sipping from and said: "Water. And sleep."

Gripping both sides of the rostrum, he urged his listeners to become more introspective and to practice "inner warmheartedness."

It's this humorous touch, members of the crowd said, that makes the Dalai Lama such an appealing figure. David Burdge, who traveled from Sacramento, Calif., for the address, said: "He has a lighthearted character."

Scholars say the Dalai Lama has become a pop-culture hero.

"He's managed single-handedly to make Buddhism popular, from Australia to Europe to South America," said Robert W. Clark, a Stanford University professor who spent more than eight years in a Buddhist monastery in the 1960s and 1970s and has worked as a translator for the Dalai Lama.

The son of a barley, buckwheat and potato farmer, the Dalai Lama took reporters' questions about his views on the environment, nuclear-waste dumping in Tibet and Idaho, and the divide between rich and poor in America - a gap underscored by TV images from Louisiana, Mississippi and Alabama since Hurricane Katrina struck.

His advice to residents of Idaho's wealthiest region: "Even if you have 100 diamonds, you still only have 10 fingers."

Thhe crowd was peppered with well-known faces. Tony Robbins, the motivational speaker, stood just to the right of the stage wearing sunglasses.

"He goes beyond religion, he goes to his heart," Robbins said afterward. "For somebody who has lived through all he has, he can still show a level of love and compassion that inspires the human spirit."