Barnet, Vermont (USA) -- The religious traditions of most Americans are rooted in the Judaism and Christianity of Europe and the Middle East. However, in recent decades, there has been a growing interest in the spiritual traditions of Asia, especially Buddhism. At a meditation center in the New England state of Vermont, Americans from many walks of life practice a Tibetan form of Buddhism. 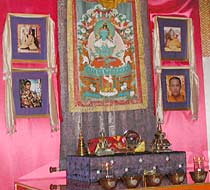 << The shrine at the Karme Choling meditation center in Vermont

Many of the chants one hears every evening in the spotless wooden and gold shrine room at the Karme Choling meditation center are updated versions of the traditional chants uttered by monks in far off Tibet. There are no Asians among the forty or so practitioners sitting on the traditional square cushions here. Some are residents, and some are visitors. According to center director Bill Brauer, Karme Choling, like America itself, is an amalgam.

"As you can see, we are dressed in Western clothes, and we eat an ordinary diet," he says, "Men and women live here together. People often meet their mates here. We take time to practice very seriously, and to practice intensely and to study deeply. On the other hand," he adds, "we have rock and roll parties and barbecues and we enjoy ourselves. Part of our tradition is that there is nothing better than to be born human, and one ought to enjoy it!" 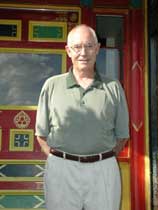 "Many spiritual traditions globally have a view that human beings are born in a sullied state or some kind of fallen state," notes Mr. Brauer, "whereas the Buddhist view is that we are by nature enlightened and that simply by sitting down with our own mind, calming our mind and looking directly at our experience we discover that enlightenment and we are liberated from confusion." 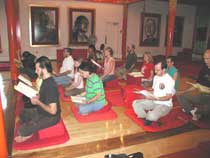 However, Bill Brauer says that, in America's affluent society, one can be easily distracted by material things, and neglect the inner work that Buddhists believe leads in true happiness.

"So, often in a state of exhaustion, people who have succeeded quite amazingly in accumulating a lot of wealth come here and say 'Help! This hasn't worked for me.'" He says that centers like Karme Choling offer alternatives to the Western individual who is beginning to suspect that one more car or one more boat or one more suit isn't going to do it."

Thirty year old Jessica Goldstein tried to find meaning in a fast-paced New York career but felt confused and unsatisfied. Then she learned how to sit and meditate - the core Buddhist practice where one focuses on one's breathing and one's mind. She says she soon began to feel more peaceful. 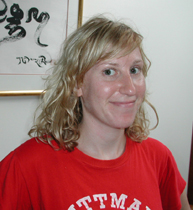 "… Because when you sit… it gives you this space and in that space you have a lot more options, so you don't react to your normal habitual patterns."

Ms. Goldstein notes that "habitual patterns often pervade one's relations with the opposite sex. "Like, I'll see a guy and think he's cute and my immediate response to that is feeling insecure and ugly and dumb. The idea of seeing that happen, but not attaching yourself to it and trying to let it go, is difficult. But it really everything much easier and much lighter and more joyful…"

Karme Choling offers workshops for people who want to apply the Buddhist approach
to their practical, everyday lives. Parlan McGraw, a New York actor, is here for a three day class that combines meditation with stage skills. He says the two are related. 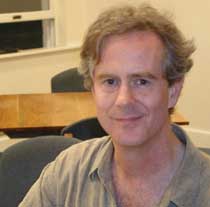 "In meditation you are just sitting still, and in acting you might be up there doing anything - making love or murdering somebody - or whatever. But they both ask you to be in the present in the moment, totally here and now and aware of what's going on around you, and what's going on inside of you, and then, in the case of acting, being able to act from that place and to react spontaneously to whatever is coming at you from the other actors on stage."

The Buddha is quoted as saying that "one's work is to find one's work and then to give oneself to it with a whole heart." That, for , is the whole point. 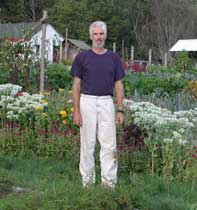 << Master gardener Jan Enthoven, who has lived at Karme Choling since 1990

"For me the training in organic gardening has to rely on developing my own humanness and my own qualities of kindness to others," he says. "So, working with a garden is not just producing vegetables, but it's also about how I work with my helpers here in the garden. How do I interact with the people in the kitchen in Karme Choling? That is for me even more important than just growing organic vegetables.

Mr. Enthoven adds that "if your heart is involved, your senses open up to what you're doing, and, as your senses are opening up, you see the brilliance of the world around you!"