Vesak celebrations at the Berlin Vihara 2013

Berlin, Germany -- Vesak was celebrated at the Berlin Vihara (Das Buddhistische Haus in Berlin – Frohnau, Germany) on Sunday May 26, 2013 under the patronage of Hon. Sarath Kongahage, Sri Lanka’s Ambassador to Germany and in the presence of a large gathering of Buddhists and well – wishers drawn from various nationalities including Sri Lankan, German, Thai, Cambodian, Vietnamese, Laos, Burmese, Bangladesh among others. 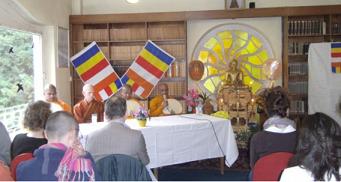 Ven. Bhante Yogavacara Rahula in his Bana sermon explained the significance of Vesak as a special day for the Buddhists and commended the meritorious services being rendered by the German Dharmaduta Society via Das Buddhistische Haus (Berlin Vihara).

Hon. Sarath Kongahage, Sri Lanka’s Ambassador to Germany said that the spread of wrong views through mis- interpretation of the Buddha’s teachings was a matter of grave concern as it tended to harm the image of Buddhism, and discredit the Buddha’s sublime message, and therefore he said that the time has come for the Maha Sangha to address this problem seriously without any delay.

Ven. Dikwelle Seelasumana Thero in his sermon dealt with the importance of celebration of Vesak and the manner in which the observance of Vesak ought to be conducted in a meaningful and consequential way. He also thanked and offered merit to all those who had assisted in making the Vesak day event a success.

Ven.  Kongaspitiye Santharakkhitha Thero identified some of the prevailing misconceptions concerning Buddhism and proceeded to clarify them, and in addition explained how one could become a true Buddhist by striving to protect Buddhism from various challenges.

Mr. Tissa Weeraratna translated some of the addresses from English into German.

A special pinkama (Buddha Puja) was held in the evening at the Berlin Vihara and the large gathering was delighted to listen to a moving Kavi – Bana sermon in Sinhala (use of poetry in the discourse) by the highly talented Dhamma preacher Rajakeeya Panditha Ven. Mahasengama Punnananda Thero from the Athkanda Vihara, Kurunegala.

Kavi Bana is a modern form of Dhamma preaching using poems and it is increasingly seen as effective in drawing the attention of the listeners and keeping them attentive throughout the sermon.

The members of the Sri Lankan community in Berlin, participated in the Vesak Day related organizing activities with much enthusiasm and were instrumental in colour washing parts of the building and decorating the premises in a manner appropriate to the celebration of Vesak.  Buddhist Flags and colourful  lanterns were prominently seen. A Dansal for lunch was organized by the Sri Lankan community and Afternoon Tea was offered to the visitors by the Berlin Sri Lanka Society.

The Berlin Vihara (Das Buddhistische Haus) is maintained by the German Dharmaduta Society founded by Asoka Weeraratna in 1952, and based in Colombo, Sri Lanka.