Allure of Buddhism growing in the UK

London, UK -- Buddhism in Britain has received another boost with the arrival of Tibetan spiritual leader, The Dalai Lama, on the latest of his goodwill missions. 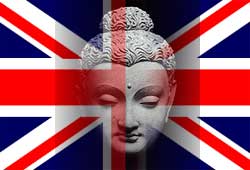 The exiled Tibetan leader was visiting Scotland where new figures show that Buddhism is the fastest growing religion in the region.

In Glasgow, according to figures from the 2001 census, and reported by The Independent, the number of people describing themselves as Buddhist has soared by 28.5 per cent.

The growing number means there are nearly 1,200 Buddhists in the city - more than the declining Jewish community, and only slightly fewer than the number of Hindus. The Muslim population by contrast, rose by just 0.7 per cent.

The census also reveals that Buddhism is more popular than Sikhism or Judaism in Wales, and lags only 0.2 per cent behind Judaism in England. In Westminster in central London, 1 per cent considers itself Buddhist, a figure matched in Cambridge.

Buddhism is based on the teachings of the Buddha, an erstwhile prince of the Saka Dynasty who lived 500 years before Christ.

It spread through Asia, only reaching Britain and the West many centuries later. It has more than 350 million adherents, the central tenet of whose faith is to put an end to suffering through the realisation of truth.