Elista, Kalmykia (Russia) -- Gaden Shedrup Choekhorling, the main Buddhist temple in Elista, Kalmykia, turned 10 on 6 October 2006 and the day was declared as a national holiday by the President of Kalmykia. 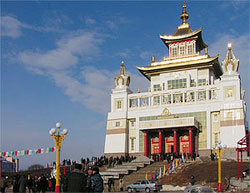 The main Buddhist temple was opened on 5 October 1996 and consecrated by His Holiness the Dalai Lama on 30 November 2004.

Mr. Tashi, Representative of His Holiness the Dalai Lama in Russia, took part in the celebration.

Hundreds of people gathered during the celebration at the temple, including President Kirsan Ilumjhinov, Kalmyk Prime Minister, governmental officials and representatives from Russian Orthodox Church and Islam.

Representative Tashi read the greeting message sent by the Department of Religion and Culture of the Central Tibetan Administration (CTA) on the occasion.

On the same day a conference on reviving Buddhism in Kalmykia was held. It was attended by more than 70 experts and specialists. During the conference Representative Tashi delivered the opening speech. During this visit he met with the Culture Minister, Larisa Vasilieva, Telo Rinpoche, Press Secretary of President Kirsan, Tibet Support Group's Chairwoman, Antonina Kookueva and Parliament member, Baatar Aduchiev.

On 7 October 2006, a meeting of local Tibetans in Kalmykia was called on where 30 Tibetan monks and thangka painters working in Elista Buddhist temple have attended. Representative Tashi briefred them on the current situation of Tibet and the ongoing Sino-Tibetan dialogue.