Removing Obstacles to Development of Buddhism in Russia

Kalmykia, Russia -- Thousands residents of the Russian Buddhist republic of Kalmykia gathered yesterday in Elista’s magnificent new temple “The Golden Abode of the Buddha Shakyamuni” to take part in a large scale ritual intended to remove obstacles on the path of the spiritual development of Buddhist teaching. 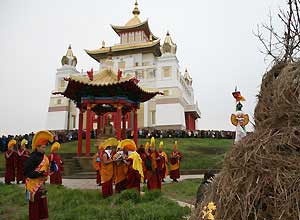 << The Torgyak ritual was performed in the Kalmyk Republic's capital of Elista, with the “The Golden Abode of the Buddha Shakyamuni” as backdrop

The Torgyak ritual, led by the Ritual Master Yelo Rinpoche, who came to Kalmykia especially for the occasion, became part of the great three day prayers conducted annually in Kalmykia to mark the end of the passing year.

”We have long dreamed to resurrect the centuries long tradition of Buddhist rituals which had been transmitted in Kalmykia from generation to generation, but which was interrupted in the dark period of Russian history” says the head lama of Kalmykia, Telo Tulku Rinpoche. “This only became possible three years ago thanks to the help of the Gyudmed monks who specialize in Tantric practice and rituals.”

The Tibetan monks from Gyudmed monastery invited by Telo Tulku Rinpoche have undergone a fifteen-year course of study in Tantric ritual practices. For the last five years, they have visited Kalmykia each year, and are sincerely happy to see the resurgence of the Buddhist republic in the south of Russia. For the Torgyak ritual they prepared a special ritual weapon, called “torma” which was consigned to the flames at the end of the ritual as a symbol of the removals of all possible obstacles arising on the path of a person dedicated to Enlightenment.

“I sincerely believe that these rituals will bring great benefit to the people our republic, as since the time when we have started to conduct them on a yearly basis, I myself, have seen the marvelous fruit they bear,” says Telo Tulku Rinpoche.

The Torgyak ritual was first conducted in Kalmykia in November of 2004 on the eve of the visit by the spiritual leader of Tibetan and Russian Buddhists, His Holiness the Dalai Lama.

During that visit, miraculous for Russia’s Buddhists, who had had no chance to see their spiritual leader for twelve long years, His Holiness the Dalai Lama consecrated the future spot of Elista’s central temple. It was precisely in this temple, which was later named by the Dalai Lama “The Golden Abode of the Buddha Shakyamuni” that prayers were delivered yesterday about the removal of obstacles for thousands of Kalmykia’s residents, as well as numerous guests from Krasnodar, Rostov, Volgograd and Moscow

For the majority of guests from various Russian cities, the Golden Abode of the Buddha Shakyamuni, ever more frequently called the center of Buddhism in Europe, this is the only place where they can touch the multifaceted phenomenon of Tibetan Buddhism in its original clarity.

We have heard much about the powerful and beautiful Tantric rituals of the Guydmed monastery, but thought that we could see them only in the south of India,” said Tatiana Liutovich, who came to Kalmykia from the city of Krasnodar. “We are truly grateful to Telo Tulku Rinpoche for inviting the Tantric monks of Gyudmed, allowing us to become witnesses to this amazing ceremony”.

”We are delighted that Tibetan Buddhism is receiving a second birth on Russian soil,” she added.

Subsequently, Tibetan and Kalmyk monks will conduct Yangdrub, a ritual of flowering and wellbeing and close with the Tangra Kanso, a ritual which turns to the Dharma protector deities for aid and support.

”We come together to accumulate spiritual merit. We pray as a single Buddhist community, and with the blessing of the Buddha, our prayers shall be heard,” says the head lama of Kalmykia, Telo Tulku Rinpoche.