MOSCOW, Russia -- Scientists and theologians from around the world are trying to solve the mystery of the incorruptible body of Hambo Lama Itigilov known as the “Buryat Nostradamus”. << Hambo Lama died in 1927 while meditating in lotus posture

About 150 researchers and theologians from Europe, Mongolia and Russia are attending the first-ever international conference “Pandito Hambo Lama Itigilov” underway at the official residence of the Buddhist traditional church of Russia – the Ivolginsky Datsan -- near Ulan Ude.

Hambo Lama died in 1927 while meditating in lotus posture and praying for the repose of his soul. The body stayed in the ground for 75 years. In 2002, when the tomb was opened, Buddhist monks saw that the body of their teacher had not decayed.

Now the relics, which are kept in a special shrine, are an object of worship.

Buddhists believe that Hambo Lama cognised Void, or Ultimate Reality. Before leaving this world, he fell in a state of mediation and cleansed his body to such extent that it became incorruptible. Secular experts cannot explain why some of the characteristics of the lama’s body are identical to those of living people.

The participants in the conference called Hambo Lama “the Buryat Nostradamus”.

Buryat theologians have found a book written by the lama allegorically in the old Mongolian language. High priest Baldan Lama Bazarov has been quoted by VIP. Buryatia.ru as saying at the conference that the deciphering of the book started immediately after its discovery.

It took two years to get a clue to part of the message, in which Hambo Lama predicted events of the 1920-1930s. But Buddhist philosophers say the code used in the book is not quite clear. The message itself is intricate enough as “one word can have different meanings”, Baldan Lama Bazarov said.

“He is the Buryat Nostradamus. If we can decipher the whole message, we will acquire the greatest knowledge,” a senior researcher at the Russian State Humanitarian Institute, Tatyana Strizhova, said.

According to the legend, 75-year-old Pandita Hambo Lama Dashi-Dorzho Itigilov XII assumed the lotus posture, meditated and ceased to breath in 1927. The monks put in him in this posture in a pine box, filled it with salt and interred in a cemetery. 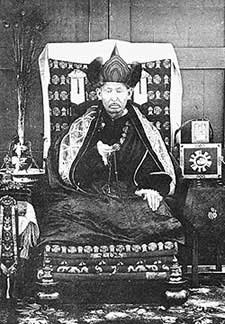 The head of the department of personal identification at the Russian Health Ministry’s forensic medicine centre, Professor Viktor Zvyagin, said Hambo Lama’s body is no different from the body of a person who died 12 hours ago.

Zvyagin and his colleagues studied tissue samples from the “incorruptible body”: hairs fallen from the lama’s head, skin pells, and a nail cut. They were compared to the samples of living persons, including those of Professor Zvyagin, and led researchers to the conclusion that the protein structure had not changed and matched that of a living person. The chemical analysis of the body produced stunning results. Scientists could not explain whey Itigilov’s body contained no or an infinitesimally small amount of chemical elements.

“Itigilov is not alive of course, for he cannot stand up and walk,” the Versiya newspaper said, referring to Professor Galina Yershova of the Russian State Humanitarian University who had also studied the body. “But when leaving this world in a state of meditation he fell not into death but in some other condition. The findings allow us to assume that the lama put himself in a state of anabiosis.”

She believes that Hambo Lama was buried alive and remained alive in the tomb all this time. “Hambo Lama’s condition changed after he was removed from the tomb, practically before our eyes,” Yershova said.

Experts say that no preserving agents were used for the conservation of the body. The analysis of a cell by the nuclear resonance method showed that the nucleus of the cell was there and the state of cytoplasm was close to that of a living person.

Although the Pandito Hambo Lama Itigilov is a unique case, he is not the only “incorruptible” Buddhist, PRS.ru said. The mummified body of monk Vuc Khac Minh has been sitting in lotus posture in the temple at Duc, 23 kilometres from Hanoi, for 300 years.

Unlike Vuc Khac Minh, Itigilov’s body has not shrunk and has suffered practically no changes at all. Moreover when the lama’s skin was accidentally punctured, a red jelly-like stuff, which had once been the blood, oozed out of the puncture.

Dashi-Dorzho Itigilov was the head of Buddhists in Eastern Siberia from 1911 to 1917. He became famous as a philosopher and a doctor. He spent his whole life in Buryatia and left Siberia only once to attend celebrations marking the 300th anniversary of the House of Romanov.

During World War One he organised hospitals and received several state awards. He became fabled in his lifetime. One of the legends holds that like Christ he could walk on the water.

Buddhists still treat Itigilov as a living person who is in a special state of body and mind, NEWSru.com said. They believe that neither knowledge nor acute mind can turn one into Dashi-Dorzho. One has to feel enormous compassion for all living beings and become a bodhisattva, i.e. “a perfect being that has the compassionate determination to aid all beings and who is on a mission to liberate all sentient beings, and only then will he rest in his own enlightenment…”