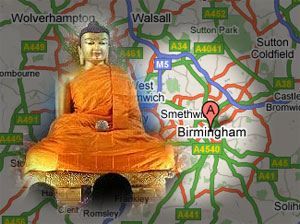 The city’s Buddhist community claimed “the time is right” for the 2,500-year-old religion to have its own school in this country that would promote the teachings of the Dalai Lama to children.

It comes after Britain’s first Hindu state school was launched in London amid concern that faith groups are increasingly taking over schools.

Plans to create a Buddhist school in Birmingham are being led by the Birmingham Buddhist Vihara Trust which last year set up the country’s first university in Ladywood devoted to teaching the ancient faith in the city.

The trust, which celebrates the 10th anniversary of the Peace Pagoda in Edgbaston next month, claimed the UK’s first Buddhist school would be built in the city within the next five years.

John Beard, chairman of the Vihara Trust, said: “The time is right. I have been asked to do it by two or three people but everything takes time with Buddhists because we have no money.

“But within the next five years you will be seeing a Buddhist school in this country and it will be in Birmingham. In ten years we have built the Pagoda, the monastery and the university. That is not bad going.”

Mr Beard said state funding would be sought for the scheme which would primarily serve the city’s 3,000-strong Buddhists community, though also be open to anyone who wanted their children to be taught along principles of the religion.

“If you can show a big enough demand then I don’t see why it shouldn’t get state funding,” he said.

“It would be really nice to have it around the Ladywood or Edgbaston area.”

Buddhist teachings emphasise personal spiritual development and strive for deep insight into the true nature of life through meditation rather than worshipping gods. The faith believes in reincarnation and the sanctity of all life with followers not allowed to eat meat.

Mr Beard claimed it had a lot to teach today’s young about looking after the environment.

“That is something we have always been concerned with for the last 2,500 years. There is a lesson to be taught here. One of the things is people are so busy these days and they tend to take what they think is the shortest route.

“But it is like a building. If you rush it and do not put in good foundations, the whole thing falls down.If you don’t look after the environment in 50 or 100 years time you have major problems. Rather than fire-fighting it is about managing our lives properly. People are more aware of this now.”
The British Humanist Society criticised the creation of more faith schools.

Its director of education Andrew Copson said: “There is nothing wrong with religion being taught in schools and people’s individual convictions should be represented.
“But these schools are 100 per cent state funded and they shouldn’t be able to chose who they admit and employ and reserve the right to teach a constricted curriculum in ways that aren’t helpful for children’s development.

“They are not inclusive and don’t contribute to the cohesion of society.”

Mr Copson said it was a “particular shame” to see other religions such as Hinduism and Buddhism opting to set up faith schools.

“Children who in previous years attended shared schools will now be attending schools that discriminate in their admission on religious grounds.”

The Krishna-Avanti Primary School in Edgware, north west London, will open its doors to the first reception class in September.

It attracted criticism last year after announcing that vegetarians will be given priority for places under its admissions rules.

The school will have 236 places and is expected to receive a large number of applications from Britain’s 1.5 million Hindus, 40,000 of whom live in the London Borough of Harrow.