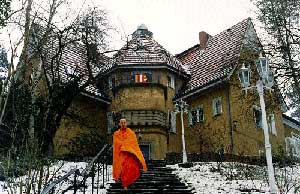 The GDS Report for 2005-2008 notes that in the period under review Berlin Vihara (Das Buddhistische Haus) drew a large number of visitors on a regular basis. Daily attendance sometimes exceeds 40 during the summer period. One interesting development is the increasing visits of German school children to the Berlin Vihara accompanied by their teachers, reflecting a new policy direction in Germany to give school children an exposure to the various religious influences in the country.

School children are drawn from schools from both within and outside Berlin. Other categories of visitors include Buddhist monks belonging to various chapters from overseas and within Germany, Sri Lankan delegations visiting Germany, members of various Societies, researchers, participants in workshops on religion, and sometimes even senior officials of various Government Depts, in Germany wishing to gain a basic understanding of Buddhism and practice of meditation, and tourists.

Das Buddhistische Haus, which is situated in the picturesque suburb of Berlin - Frohnau, was built in 1924 by the German Buddhist scholar Dr. Paul Dahlke. It now attracts a large number of visitors daily ranging from researchers to school children. This temple has one of the best Buddhist Libraries in Europe. Meditation retreats, Dhamma classes, Saturday discussion circles and Sunday lectures are a regular feature of the programme of the Temple.

It is now owned and maintained by the German Dharmaduta Society which purchased the property in 1957. Since that year a stream of Buddhist monks from Sri Lanka and other countries have resided at the Berlin Vihara to propagate the Dhamma in the West. The temple is managed by GDS Vice – President and Trustee Tissa Weeraratne.

Currently the temple has two Sri Lankan-born resident monks namely Ven. Dikwelle Seelasumana Thera and Ven. Wilachchiye Dhammavijaya Thera. There is a staff of four including two German nationals who are responsible for the maintenance and upkeep of the premises.

This Sri Lankan-managed temple is one of the few – if not the only – Sinhala Buddhist Vihara in the West which has not been branded by non-Sri Lankans a poiliticised ‘ethnic temple.’ Consequently the Vihara has been very successful in attracting Westerners - both Buddhists and non-Buddhists – in large numbers.
TOP