Kalmykia, Russia -- Members of a regional Buddhist council in Russia’s North Caucuses, have asked Prime Minister Vladimir Putin to help them secure a visit by the Dalai-Lama to the republic, Russian website Gazeta.ru reports. 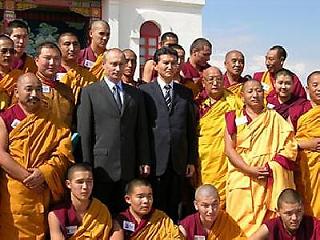 “Kalmyk Buddhists have been living peacefully in Russia with their spiritual brothers - orthodox Christians and Muslims for four hundred years.” He added.

The heads of the Buddhist communities of two regions of Russia – shadzhin-lama of Kalmykia Telo Tulku Rimpoche, and kamby-lama of Tuva, Jampel Lodoy approached the Russian Ministry of Foreign Affairs with a common plea for the Dalai-Lama to be given an entrance visa to Russian territory.

“More than a million practicing Buddhists in Russia are awaiting instruction by their spiritual teacher, and millions of Russians of various other religions would like to get an opportunity to meet the Nobel Peace Prize winner, whose policy of peace and compassion is an example for the whole world”, states the appeal.

The heads of the Buddhist communities also noted that over “the last 17 years, during which Russian Buddhists have been asking a full visit by His Holiness the Dalai-Lama, dozens of temples have been built, which need the ritual of consecration”.

“A one-day visit to Kalmykia in December 2004 was so short that even people from outlying districts of Kalmykia could not meet the Dalai-Lama, much less pilgrims from Buryatia and Tuva. More than that, classical Buddhist education specifies prolonged instruction under the guidance of a spiritual teacher, which is impossible to realize in the framework of a single day visit, which can barely serve only to get acquainted,“ the appeal notes.