London, UK -- Suspected members of the Liberation Tigers of Tamil Eelam (LTTE) in London during the small hours of May 13 attacked Kingsbury Sri Saddhatissa International Buddhist Center in London and smashed up seven windows. 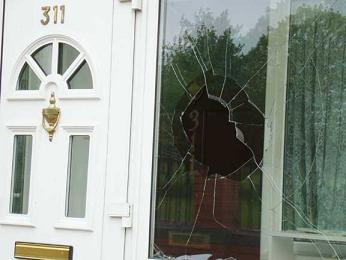 Venerable Wanduramba kassapa , an eyewitness at the crime scene said , “About seven males used half pieces of bricks one of them carried to the temple premises in a sack to smash up the down stairs and upstairs window panes using them as missiles.”

Venerable Kassapa said this is the eighth attack on the temple by London’s LTTE members.

Venerable Kassapa said through the CCTV cameras he first saw two young men coming near the temple. It was 3.15 in the morning. One of them went to the park and probably used a cell phone. Then about five others came and joined them.
Venerable Kassapa suspecting something foul pushed the panic alarm connected to the police.

But all of a sudden they started attacking the window panes of the building using half pieces of bricks as missiles.

But after four minutes later when the police arrived all attackers, had disappeared and pieces of glass and 15 half pieces of red bricks were strewn all over the place. The same gang is suspected to have removed one of the CCTV cameras few days before the crime.

The Metropolitan Police is investigating.

Smashing up windows is the newest violent form of protest practiced by the LTTE. During the last few weeks LTTE members smashed up windows of the Chinese embassy, and the High Commission offices of India and Sri Lanka.