Buddhists return from four-year retreat on isle of Arran

Scotland, UK -- A Tibetan centre in southern Scotland has welcomed a group of monks emerging after a four-year Buddhist retreat. 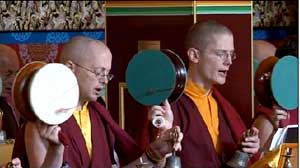 The 20 men have been cut off from the outside world since June 2005 when they entered a special sealed-off study centre on the Isle of Arran.

They emerged at the weekend to be taken to the Samye Ling Centre at Eskdalemuir in Dumfries and Galloway.

One of the monks described it as "the most difficult thing I have done in my life, without question".

The format of the retreat was designed to achieve the deepest possible understanding of Buddhism and of their own minds.

Their days began at 3.45am and finished at about 11pm and were filled with rounds of prayer, meditation and study - every day for four years.

A warden delivered essential supplies to the threshold of the former farm buildings where they were based, off the west coast of Scotland.

Apart from occasional family letters and visits from outside teachers they had no contact with - or knowledge of - the wider world.

One of the monks - Martin known as Gega - was convinced to take the retreat by a Buddhist teacher at Eskdalemuir.

"I was interested in trying to understand what my mind is and he said to me if I really wanted to do that then the place to go would be into retreat," he said.

"Ordinary life is just too busy, you don't have the opportunity."

The men on retreat were completely unaware of most of the major events of the past four years and have just started "catching up".

Paul, named Zangpo, said: "We did get snippets of news through, for instance we heard about this economic meltdown and stuff like that and President Obama getting into power.

"We were getting little bits of information in."

One nun who has been on a previous retreat described it as the "most useful, beneficial and effective years of my life".

"We know that they have made such an effort ... it is quite an intensive programme," said Ani Lhamo.

"Whereas we have been enjoying all the things you can enjoy in normal life.

"Just thinking of that generates a feeling of respect."

Many members of the group are now being gently reintroduced to ordinary life with a week of prayer, meditation and socialising at the south of Scotland centre.

"Even just to be around the energy of groups of people is a bit tiring, it is strange," said Paul.

However, Martin added that there was a feeling of pride in having completed such a lengthy retreat.

He said: "Just to keep that together for four years is quite a hard thing to do.

"So there is a sense of some kind of achievement and we will see in the future what long-term benefit comes from it."