The lost lands of Buddhist belief

Peshawar, Pakistan -- In today's religiously riven landscape, it's hard to imagine how Hinduism, Buddhism, Jainism, Islam, Sikhism and Christianity took turns to water the land, each to its own degree. Of these, perhaps we know the least about Buddhism because it was so very long ago. 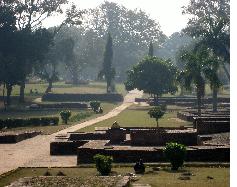 But around CE 406, it was recorded that there were 3,000 Bhikkus of the Theravada school in Bannu in the Northwest Frontier. In Peshawar, the grand pagoda built by Kanishka was so impressive that the opinion was, "Of the various pagodas in the inhabited world, this one takes the highest rank."

In Punjab proper, across the Indus, lay a region called Bhida where Buddhism flourished. The local people were very touched to see foreign Buddhists and looked after them with great care and affection as Lord Buddha himself would have wished. Across the Land of Five Rivers, there were many monasteries with nearly ten thousand monks. In Vrajamandal at Mathura, there were twenty monasteries on the banks of the Yamuna. It was also observed that "All the kings of the countries to the west of the desert are firm believers."

While everyday people gave utmost respect to Buddhist priests, the priests occupied themselves with "benevolent ministrations, and with chanting liturgies; or sitting in meditation". When travelling priests arrived, they were welcomed at these monasteries with water, oil and "the liquid food allowed out of hours" and given rooms to rest in.

Nuns mostly made offerings at the pagoda of Ananda, because it was he who begged the Buddha to allow women to become nuns and realise their spiritual yearnings and give them the option too, of renouncing domestic life. Novices, both girls and boys, usually made their offerings to the Buddha's son, Rahula.

The old bastions of the plains - Sankasya, Kanauj, Ayodhya, Sravasti, Kusinagara, Vaishali, Pataliputra, Rajagrha, Nalanda, Sarnath and Kausambi - were then centres of Buddhism. At Jetavana monastery, "the water in the ponds was clear, the trees luxuriant in foliage, with flowers of various hues, truly so beautiful to behold that it was named the Shrine of the Garden of Gold".

The person who made these notes further spent three years learning Pali and Sanskrit and copying Buddhist texts at Pataliputra and another two at Tamluk port on the mouth of the Hooghly, copying more texts and drawing images, before sailing for Sri Lanka in CE 411. You guessed it, it was Fa-hian. Don't you wonder what he'd say today about both sides of the Himalaya?