Amid rising violence, the country is trying to revive travel to its northwest - rich in Buddhist history and significance - which could generate billions in revenue, but lies next to Taliban havens

TAKHT-i-BAHI, Pakistan -- Religious violence may be on the rise and the Taliban still a threat, but Pakistan is hoping a rich Buddhist heritage will help it boost international tourism to its troubled northwest. 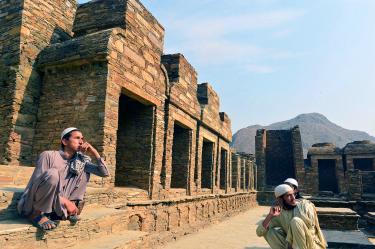 Khyber Pakhtunkhwa Province, with its balmy climate in the mountains and its wealth of history on the border with Afghanistan, was once a playground for colonial adventurers and a favorite holiday destination for upper-crust Pakistanis.

Yet after the Sept. 11, 2001, attacks on the US ushered in war in Afghanistan and an insurgency against the Pakistani government, it has become synonymous with Pakistani Taliban and other Islamist militants who have killed thousands in recent years.

Wealthier Pakistanis and Westerners stopped visiting, scared away by attacks and the threat of being kidnapped, but the provincial government is now trying to lure thousands of visitors from wealthy Asian countries such as Japan and South Korea.

A group of about 20 Buddhist monks from South Korea made the journey to the monastery of Takht-i-Bahi, 170km from Islamabad, and close to the tribal areas that are a haven for Taliban and other Islamist militant groups.

“We really felt it is our hometown, it was a great feeling which it is not possible to describe in words,” Jeon Woon-deok, a senior South Korean monk, told reporters by e-mail of the visit last year. “We only regret that we waited so long to come here.”

The journey was no straightforward pilgrimage.

The monks defied appeals from Seoul to abandon their trip for safety reasons and were guarded by Pakistani security forces on their visit to the monastery, built of ocher colored stone and nestled on a mountainside.

From about 1000 BC until the seventh century AD, northern Pakistan and parts of modern Afghanistan formed the Gandhara Kingdom, where Greek and Buddhist customs mixed to create what became the Mahayana strand of the religion.

The monk Marananta set out from what is now northwest Pakistan to cross China and spread Buddhism on the Korean Peninsula during the fourth century.

The gardens of Takht-i-Bahi host picnicking families and daydreaming teenagers, as well as students from nearby Qoranic schools, but foreign visitors are rare.

“There used to be foreign tourists here in the past, but after the attacks there are hardly any,” local guide Iftikhar Ali said.
The flow of adventurous tourists from East Asia is no more than a trickle at the moment — Ali said he sees only one or two visitors a month on average.

“For them this place is like Mecca,” said Zulfiqar Rahim, the head of the Gandhara Art and Culture Association, which is dedicated to the promotion of Pakistan’s Buddhist heritage.

The Pakistani authorities are even planning package tours for visitors from China, Japan, Singapore and South Korea, including trips to the Buddhist sites at Takht-i-Bahi, Swat, Peshawar and Taxila, near Islamabad.

“The tourism potential is enormous. If each person who comes spends US$1,200 with hotel costs and all the rest, and 1 million people come, that makes 1 billion dollars,” Rahim said, “And we’re not talking about 1 million people, but 50 million Mahayana Buddhists in Korea, China and Japan.”

However, there is a long way to go. It will be difficult to overcome huge security problems, poor tourist infrastructure and the challenges of getting a visa and permission to travel to high-risk areas.

Enormous floods in 2010 caused further damage, although the US has since provided US$5.4 million to help revive the local economy and rehabilitate tourism in the province’s Swat District.

For now, it is mostly local visitors who come to the remains of the Buddhist sites in Pakistan. Reflecting on his country’s woes, Sajjad, a teacher gazed at a statue of Buddha and sighed: “We need this calm so much.”