A lost Nirvana: Swats window into the past closes as Kanderai slowly disappears

Kanderai, Pakistan -- Neglected by the government, Kanderai, the remains of one of the largest and most fascinating Buddhist settlements, will soon crumble to dust. 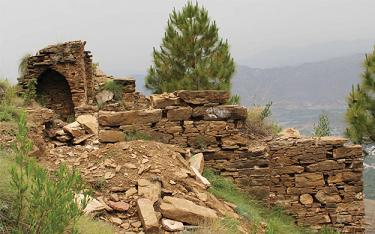 The settlement, locally known as Kanjar Kotey, has been mercilessly excavated and destroyed by smugglers.
The site is located on top of a hill some three kilometres from Barikot Bazaar, close to Karakar Pass. Given its position and architecture, it is likely to have been a key Buddhist settlement.

In its original form, Kanderai possibly included a principal courtyard, an assembly hall, a great vihara (quadrangle court outlined with small cells), a smaller vihara, and single storey cells. There also may have been multi-storey houses with stupas, cisterns, water tanks and isolated tower houses dotting the site. The remnants of cisterns and hydraulics coupled with the area’s proximity to natural water sources point to potential large-scale farming activities.

While there is not much proof a major monastery ever existed here, structures do point to what may have been a large residential, sacred site.

A serenity and calmness greets visitors when they first reach Kanderai. Perhaps this is why, apart from smugglers, the remains also attract a substantial number of history buffs and tourists.
Amjad Ali, a local journalist passionate about archaeology, was spending part of his day exploring various aspects of the ruins. “I am really sorry to say illegal excavation has not been stopped,” he told The Express Tribune, greatly disturbed by the sad state of Kanderai.

Extensive excavation can be seen almost everywhere, as smugglers and fortune seekers seem to have ruthlessly destroyed whatever is left of the structures.

“Many people, in groups or otherwise, come here with digging tools and metal detectors to search for coins. Then, they leave the site in a state of careless disrepair,” pointed out a local farmer. “We have never seen marauders being stopped or even warned.”

Faisal Yousufzai, a student visiting the Buddhist archaeological spot, found the area beautiful to visit but shared concerns regarding the illegal activities which were continuing to go unchecked. “The government should protect it (Kanderai) by hiring guards to prevent further destruction,” he argued.

According to archaeological experts, Kanderai has the potential to reveal Swat’s ancient association with Buddhism, religious tourism and great eras such as the reign of Emperor Asoka. But none of this can take place without legal protection.

“Kanderai is probably the largest Buddhist settlement in the Swat Valley circa third and fourth century.  It is a very large and important ruin, which covers more than three hectares and looks very much like the Takht Bhai ruins,” explained Dr Luca Maria Olivieri, the Director of the Italian Archaeological Mission in Swat. The site should be notified and legally protected by the government, maintained Dr Olivieri.

“If scientific excavation is carried out, rich discoveries are likely to be made …after excavation it will probably be one of the most exciting sites in Swat. People will have the same experience they get in Takht Bhai,” he added.

A rare clue into the region’s phenomenal history, Kanderai might soon vanish if the loot and plunder combined with the lack of preservation continue. Without official protection as a heritage site, there will be nothing left to build archaeological tourism around.

Insight into the lives of Buddhist monks and their wealthy patrons, who built these great sites as an act of worship, are still within reach at Kanderai. However, only scientific exploration of the most delicate nature can now be withstood by these already damaged ruins.