NEW YORK, USA -- An ancient stone sculpture of Buddha’s footprints that was smuggled into the United States and had been expected to sell for more than $1 million was returned to the government of Pakistan on Wednesday. 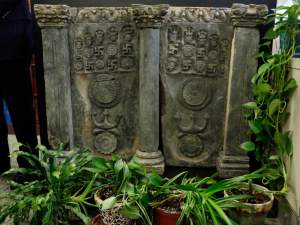 << A second century C.E. Buddhist sculpture is displayed during a news conference in the office of the Manhattan District Attorney, in New York, Wednesday, April 27, 2016.
Richard Drew/AP

The piece, called a Buddhapada, was taken from a Pakistani region rich in Buddhist history decades ago. It was returned by New York prosecutors to Pakistani Deputy Chief of Mission Rizwan Saeed Sheikh, who said it will remain in the city for the time being and may be exhibited at a museum.

Sheikh said the Buddhapada, weighing nearly 500 pounds, was “an important element of the cultural history of Pakistan” and he was relieved to have it returned.

A Japanese antiquities dealer pleaded guilty last month to criminal possession of stolen property in a scheme to smuggle it into the U.S.

Tatsuzo Kaku made the plea in exchange for a $5,000 fine and a sentence of time served and left the country voluntarily. He said he shipped the 2nd-century Buddhapada from Tokyo to New York to sell it at a gallery, where it was expected to fetch $1.1 million.

He said he knew it had been excavated and removed from the Swat River valley, a mountainous region of northern Pakistan, in 1982. He said in court that, while he stood to benefit financially, he also was motivated by a lifelong desire to preserve such works for fear they would fall into disrepair or be destroyed if they remained in Pakistan.

Scholars and art historians say there’s little truth to the argument. UNESCO initiated a program more than a decade ago with funds from the U.S. to preserve images of Buddha and other works found in the region.

During the time the Buddhapada was stolen, there were no major threats to any archaeological sites, said Muhammad Zahir, an assistant professor at Hazara University in Pakistan who works in the Swat valley.

Even when the Taliban was present in 2009, the government of Pakistan had plans to protect or remove ancient Buddhist art from the valley and safely moved museum artifacts during military operations to combat the Taliban, he said.

Zahir said in an email from Pakistan that a far more realistic reason for the looting was the demand in the Western and Southeast Asian markets for Buddhist art from the region.

The repatriated piece is a large stone slab with columns and two large footprints. Within the footprints are symbols, including a swastika, a 5,000-year-old Sanskrit symbol that denotes auspiciousness and was co-opted by Nazi Germany.

Prosecutors said the Buddhapada is “so much more than a piece of property.”

“It’s an ancient piece that speaks to the history and culture of Pakistan that should be celebrated and protected,” Manhattan District Attorney Cyrus R. Vance Jr. said.

Kaku, who’s 70 years old, was arrested in mid-March after a rival art dealer co-operated with authorities. Prosecutors said he was spared prison time in part because he co-operated with an ongoing larger investigation. The district attorney’s office and federal agents have been looking into the illegal sale of other antiquities from the same part of the world.

Just days before Kaku’s arrest, two ancient Indian statues that had been smuggled out of that country and made their way to New York were seized from an auction house.