Buddhist programme reaches out to Nepal

Kathmandu, Nepal -- “Noble Wisdom”, the first of its kind Buddhist television programme has now been made available in Nepal said the Sherab Sangpo Society, producers of the programme in a release, today. 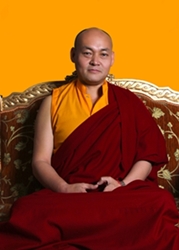 Commemorating its 1st anniversary, the programme can now be viewed on the popular Nepal satellite channel, Nepal 1. The non-profit charitable organisation founded under the auspices of His Eminence Tsona Gontse Rinpoche, launched the programme last year on May 27 coinciding with the Saka Dawa commemorations.

The programme being aired on Sadhna channel was inaugurated by His Holiness the Dalai Lama in Patna a year ago.

The release said that the move is being taken in consideration of the sizeable amount of Buddhists living in Nepal while pointing out that the programme was also aimed at reaching out to non-Buddhists who have genuine interest in the Buddhist philosophy and the teachings of Lord Buddha.

“His Eminence Tsona Rinpoche is very much involved in the spiritual upliftment of the Buddhist minorities living in the entire Himalayan region, hence the society is leaving no stones unturned to expand its viewership”, the release noted.

The satellite channel Nepal 1 is available on all major DTH services.
TOP