KATHMANDU, Nepal -- It is a hot, cloudless morning on a hillside on the outskirts of Kathmandu and dozens of nuns arrange themselves into lines around a golden Buddhist shrine. 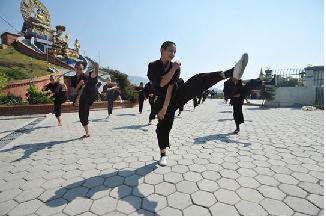 << The sisters of the Amitabha Drukpa Nunnery are the world’s first order of kung fu nuns.

In unison, each slams a clenched fist into their opposite palm, breathes deeply and waits, motionless in the rising heat.

But these devotees are not here to pray or to meditate, for they have gathered to undergo a rigorous and aggressive martial arts routine as the world’s first order of kung fu nuns.

The sisters of the Amitabha Drukpa Nunnery - aged from nine to 52 - come from across Nepal, India, Tibet and Bhutan to learn the ancient Chinese discipline of kung fu, which they believe will help them be better Buddhists.

Every day, they exchange their maroon robes and philosophical studies for an intense 90-minute session of hand chops, punches, shrieks and soaring high kicks.

“The main reason for practising kung fu is for fitness and for health, but it also helps with meditation and self-defence,” 14-year-old Jigme Wangchuk Lhamo, who was sent to the nunnery from Bhutan four years ago, told AFP.

“When we practise kung fu we are doing something which gives us not only strong bodies but also strong minds.”

Buddhist nuns in the Himalayas have traditionally been seen as inferior to monks, with the women kept away from physically demanding exercise and relegated to menial tasks like cooking and cleaning.

But the 800-year-old Drukpa - or dragon - sect is changing all that by mixing meditation with martial arts as a means of empowering its women.

The nuns, in contrast to most Buddhist groups, are also taught to lead prayers and given basic business skills, as well as running a guest house and coffee shop at the abbey and driving jeeps to Kathmandu to get supplies.

Kung fu came to the nunnery only four years ago when its spiritual leader, His Holiness the 12th Gyalwang Drukpa, visited Vietnam, where he saw nuns receiving combat training that was previously used by Viet Cong guerrillas.

He was so impressed that he brought four of the Vietnamese, all women in their 20s, to Nepal to add kung fu lessons to the nuns’ yoga classes and lessons in the nuances of good and bad karma.

“Our nuns... are very new to modernisation and are timid and lack self-confidence,” the Gyalwang Drukpa wrote in a recent blog post.

“I am not saying that I am a great teacher or a great leader but the path that I have decided to take in order to promote gender equality, so as to bring about the nuns’ improvement, gives me great encouragement to work harder and live longer.”

Jigme Konchok Lhamo, 18, who came to the order from India, says kung fu has quickly made the nuns more assured and has begun to address the power balance between men and women in Buddhism.

“His Holiness wants the nuns to be like the men, with the same rights in the world,” she said. “That is why we get the chance to do everything, not just kung fu.

The nunnery is enjoying a surge in popularity since introducing the kung fu lessons and now has some 300 nuns practising martial arts techniques.

They have given demonstrations of their skills to thousands of pilgrims in Nepal and have toured India and Britain.

The nuns say the repetitive nature of Shaolin kung fu, which comes from the Buddhist temple of Shaolin in China’s Henan province, helps them to learn control and focus.

The benefits are obvious for young women who are expected to meditate in the same position for up to six hours at a time and sometimes undertake retreats during which they must remain silent for months.

Jigme Migyur Palmo, a soft-spoken 21-year-old nun, who came to Kathmandu three years ago from her home in Ladakh, in northern India, said kung fu works in harmony with her spiritual life.

She watched Jackie Chan kung fu movies when she was younger and now wants to be as good as the Hong Kong film star.

“I came to Kathmandu to learn Buddhist philosophy and now I don’t want to go home, I want to stay here my whole life,” she said.