LO MANTHANG, Nepal -- Dozens of painters sat atop scaffolding that soared toward the roof of an ancient monastery. With a swipe of their brushes, colors appeared that gave life to the Buddha. Gold for the skin. 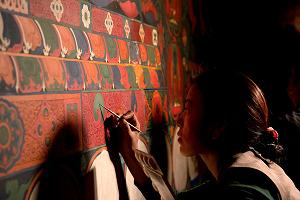 << A local woman worked on a historic mural at Thubchen Monastery in Lo Manthang, Nepal.

They worked by dim portable electric lights. Dusty statues of Tibetan Buddhist deities gazed on. From openings in the roof, a few shafts of sunlight fell through the 35 wooden pillars in the main chamber of the enormous Thubchen Monastery, the same edifice that had awed Michel Peissel, the explorer of Tibet, when he visited a half-century ago.

“In Nepal, no one knows how to do this, so we have to learn,” said Tashi Gurung, 34, a painter participating in what is one of the most ambitious Tibetan art projects in the Himalayas.

Financed by the American Himalayan Foundation, the project is aimed at restoring to a vibrant state the artwork of two of the three main monasteries and temples in Lo Manthang, the walled capital of the once-forbidden kingdom of Mustang. Bordering Tibet in the remote trans-Himalayan desert, Mustang is an important enclave of Tibetan Buddhist culture.

Tibetan leaders, including the Dalai Lama, say their culture is under assault in the vast Tibetan regions ruled by the Chinese Communist Party, which occupied central Tibet in 1951. That, along with the encroachment of modernity, means that the act of preserving or reviving Tibetan art is arguably more important than at any time since China’s devastating Cultural Revolution.

The project in Lo Manthang has stirred debate. Some scholars of Tibetan art assert that the painters in Lo Manthang are altering important historical murals and jeopardizing scholarship by painting new images atop sections of walls where the original images have been destroyed. Those involved in the project argue that residents want complete artwork in their houses of worship.

The project’s director is Luigi Fieni, 39, an Italian who first came to work here after graduating from an art conservation program in Rome. Mr. Fieni and other Westerners have trained local residents to work on the art, creating a 35-member team that includes 20 women and one monk (though there was initial reluctance from local men to tolerate the women’s participation).

There are three major religious buildings in Lo Manthang. Two of them are monasteries, and one is a temple traditionally used for ceremonies by the royal family. Their thick, red walls rise among alleyways that wind past whitewashed mud-brick homes. An 80-year-old king and his family reside in a palace in the town center. The town was founded in the 14th century, and the oldest religious buildings date to the 15th century.

Much of the Tibetan art here reflects a Newari influence, which comes from the Katmandu Valley. Centuries ago, Newari artisans were welcomed by some Tibetan rulers, especially those who followed the Sakya branch of Tibetan Buddhism, which is common throughout Mustang.

The art project began in 1999 with the cleaning of murals in Thubchen Monastery, after an initial round of architectural reconstruction. Then the painters moved on to Jampa Temple, where the dark main chamber has a towering statue of Maitreya, the future Buddha.

The walls on the first floor are adorned with remarkably detailed mandalas, a form of geometric art considered a representation of the cosmos. Here, Mr. Fieni decided to deviate from the initial approach taken at Thubchen. He wanted his team, rather than do purely restoration, to paint sections of the walls where an original mural had disappeared or been destroyed.

The painters would then try to recreate those pictures based on tradition and on what had been painted elsewhere in the chamber. Mr. Fieni also consulted with monks to ask what pictures they wanted on the walls. In 2010, the team returned to Thubchen to adopt the new approach and paint large sections.

“Call this painting, not restoration or conservation,” Mr. Fieni said. He added that this method helped restore the living nature of the artwork, as opposed to what he called the Western “colonialism” approach of preserving the old above all else.

“When we arrived, we started working following the Westerners’ theories of conservation,” Mr. Fieni said. “Then, while working and living within the community, I changed my point of view, and I decided to follow the needs of the culture I was working for. So I decided to start reconstructing the missing areas.”

Once taught how to paint, local residents decide how they want to decorate the monasteries, Mr. Fieni said.

“All the other conservation projects I’ve seen are Westerners doing the artwork, locals fetching clay,” he said. “This is the first one where we train the locals.”

There were challenges. Painters in higher castes initially did not want artists in lower castes sitting on the scaffolding above them. And there were religious beliefs to accommodate. At the buildings, an abbot used a mirror to absorb the spirits of the gods in the statues and murals before the painting began; after the project is completed, the abbot is expected to release the spirits from the mirror so they can return.

Mr. Fieni’s approach to restoring the temples and monasteries has been contested. Christian Luczanits, a senior curator at the Rubin Museum of Art in New York, which displays Himalayan art, said he blanched at what he saw when he traveled to Mustang in 2010 and 2012. Mr. Luczanits said that sufficient scholarship had not been done into the original paintings. Now, because of the new painting, any scholar wanting to study the originals must look at photographs rather than rely on what is present in the temple, he said.

“The temple now after restoration cannot be understood anymore without the previous documentation,” Mr. Luczanits said in an interview.

Last year, he made his opinion known at a contentious meeting at the palace in Lo Manthang. Among those present were Mr. Fieni, an abbot, the prince of Mustang and representatives of the American Himalayan Foundation, which gives financial support to many development projects in Mustang. (The foundation’s president, Erica Stone, said the total being spent on the building renovations in Lo Manthang alone was $2.58 million. An additional $768,000 had been spent for restoring the town wall and constructing drainage.)

There was vigorous debate, and the royal family and the abbot both backed Mr. Fieni. The ceremonial prince, Jigme Singi Palbar Bista, said in an interview that the buildings “are renovated very well.”

Thoroughly painting Thubchen Monastery would take another three to four years, but the project’s budget will run out this year. Mr. Fieni estimated there was a total of about 3,660 square feet of wall space to paint.

He said he was thinking about moving on to restoration projects in India or Myanmar with some of the painters he had trained here. In 2006 and 2007, he took five of them to work with him at a Tibetan monastery in Sichuan Province, in western China, a project that was never completed because the Chinese authorities shut down access to the area after a Tibetan uprising in 2008.