Lumbini, Nepal -- The plain of Terai, a poor agricultural land crossed by holy rivers, straddles the border between Nepal and India. Its sweltering summers see temperatures climb above 100 degrees, but this parched terrain might be on the verge of tumultuous changes. On the Nepali side is the small city of Lumbini, which, after long neglect, is now at the center of great power politics. 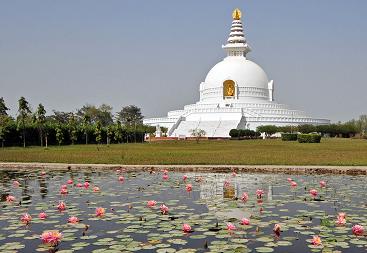 << Many have long lamented the untapped tourism potential of Lumbini, known as "the Buddhist Mecca."

This is where the Lord Buddha was born, about 2,500 years ago, under a bodhi tree at the bend of a small creek. His mother, a Hindu princess called Maya, was traveling to her parental home in Kapilavastu when her labor started, and all her entourage could do was stop and arrange a place for her to give birth under the tree, near a pool of water.

Lumbini, sometimes called "the Buddhist Mecca," has been described as a potential gold mine for Nepal, and many have been lamenting that its impressive tourist potential should be so underdeveloped, with just a small white temple sitting on the holy grounds. Those who come, though, appreciate the calm of the place, and sit cross-legged in meditation, or murmur sacred scriptures in small groups. Monks and nuns from all over the Buddhist world tour the temple, which shelters a series of carved stones that depict the holy birth, and just sit on the grass outside, in contemplation.

The idea of developing Lumbini has long been toyed with by various organizations, from the World Federation of Buddhists to the United Nations, not forgetting numerous Nepali agencies that have looked at the birthplace of the Buddha as a possible resource. The U.N. got its eyes on Lumbini early on, under the presidency of U Thant, himself a Buddhist, who visited in 1967. Three years later, the U.N. International Committee for the Development of Lumbini (now the U.N. Lumbini Development Trust) was established, with the approval of the Hindu King Mahendra, traditionally regarded as a descendant of Hindu gods.

In 1972 the committee selected Japanese architect Kenzo Tange to draw up a project for a Peace Park that would surround the temple, approved by the king (who died later that year) and the committee itself. Six years and a few more high-level U.N. visits later, part of what became known as the Tange Master Plan is now partially built. Arched red-brick bridges reach over a straight canal, and a red-brick museum with a Bauhaus-like flair to it sits by a reflecting pool about a quarter of a mile from the small white temple.

The U.N. involvement means a lot of emphasis is given to representing Buddhist nations: On one side of the canal, every country that follows the Theravadha ("Small Vehicle") tradition of Buddhism - such as Burma, Cambodia, Laos, Sri Lanka and Thailand - has, or will have, a temple. The other side is reserved for the countries following the Mahayana tradition ("Greater Vehicle"), like China, Japan, Korea and Mongolia. It translates into a hodgepodge of styles and many replicas of famous buildings. Burma has built a concrete Shwedagon Pagoda; China, a smaller version of the Forbidden City. So far only about a dozen of the foreseen 42 buildings have been erected. One of the problems has been the lack of cash: The finished project should cost about $64 million in total, but not all contributing Buddhist countries see this as a priority.

Enter the Asia Pacific Exchange and Cooperation Foundation (APECF), a well-funded Chinese association headed by a rather mysterious figure, Linus Xiao Wunan. A Buddhist and a Chinese Communist Party member, he wants to see a whole Peace City built here and a tower called "Lumbini Cloud."

"We have already broken ground," says Mr. Xiao, in his living room in a diplomatic compound in Beijing, showing an artist's impression of a tall and slender "celestial observatory" building that will host restaurants, temples, shops and prayer rooms in a circular ring built several hundred feet from the ground. "We have agreed on a project with VTP Global," he says, referring to a theme-park development group based in London. Around him, a confusing array of pictures hints at a complex biography: At the back, Mr. Xiao is seen posing next to the Dalai Lama, whom he met in Dharamsala, where the Tibetan government in exile resides. Other photos show him surrounded by high prelates of various Buddhist sects. But next to where he sits, on a coffee table, is a portrait of Mao Zedong.

"We have the full support of the Nepali government," he says. Not that Nepal has much of one at present, since a caretaker administration has been sitting in Kathmandu for the past 10 years. Before that, a lengthy civil war led to a short-lived communist government, which subsequently collapsed. The next elections are scheduled for November. The caretakers are headed by Pushpa Kamal Dahal, the former leader of the Maoist guerrilla known as Prachanda, or "the Fierce," who also sits on the board of the Lumbini Cloud Project, and has signed a memorandum of understanding (MOU) with Mr. Xiao to go ahead with it.

Not everyone is in accord, and some even see self-interest in Dahal's motives, but Mr. Xiao is not troubled with these developments. Yet he remains vague on many details - like questions about where the $3 billion he claims to have for Lumbini is coming from, or if the Chinese Ministry of Foreign Affairs is backing APECF.

"APECF is part of the grander strategy of increasing China's soft power," Mr. Xiao says, "but we are independent, and the Lumbini development project is our own idea."

Still, China is also getting busy building an international airport here, with direct flights from major Chinese cities, as well as restaurants and hotels to cater to the devout masses.

The U.N. is also still involved: Ban Ki-moon, the Secretary General and himself a Buddhist, has often mentioned the need to develop Lumbini, and those in the know say that the push comes from Mr. Ban's mother, a fervent Buddhist. At least one Korean sect, called Chhoge, has been received by Mr. Dahal for this very reason, and according to Nepali newspaper reports Mr. Dahal has signed an MOU with it, too.

"Our plans are not incompatible," says Mr. Xiao in Beijing. "This is going to be for the whole Buddhist world. To those who find it too striking, I say: At the beginning nobody liked the Pyramid at the Louvre."

India, once more, is left looking uneasily as China expands its influence in its backyard, tapping into the soft-power potential of Buddhism, and an air of Buddhist Great Game can be felt in what was until now the sleepy, holy site of Buddha's birth.