Kathmandu, Nepal -- Hundreds of Muslim and Buddhist schools want to join the public school system after the government signalled its intention of recognising religious schools, but has set some conditions to do so, namely that such schools also use non-religious textbooks recommended by the government’s Education Board rather than rely exclusively on their own religious texts. 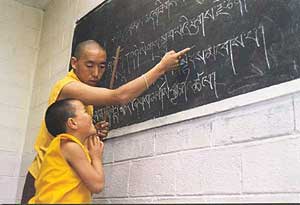 Till a few months ago Nepal was the only Hindu monarchy in the world. Religious schools were not recognised but merely tolerated.

When the country became a secular state in June 2007 a madrassa or Islamic school was recognised in Banke District.

This opened the floodgates as the authorities not only authorised all religious schools but pledged financial aid to each school to the tune of 9,000 Nepali rupees a year for fiscal year 2008-2009, and went even further promising to pay for a yet to be determined number of teachers.

They also said they would offer funding to the Gurukul, traditional Hindu schools.

This “has led to a demand for registration by Buddhist monasteries,” said Bhadra Bahadur Gole, an administrative officer with the Ministry of Local Development’s Monasteries Management Committee. However, “schools must use English and Nepali-language books in their curricula,” he explained. At present there are 200 new Buddhist-run schools.

But for Lama Khenpo Nawang Bosher, chairman of the Monasteries Management Committee, 9,000 rupees are not enough. He wants the government to provide more funds to Buddhist schools which are usually residential and provide food and board to their students.

“If the government respects its commitments, we can accept that the schools in our monasteries join the national system,” he said.

Buddhists and Muslims also want the government to recognise their high schools and universities.

However, not everyone is happy. On 12 February Salim Mohamad, spokesman for the Muslim Mukti Morcha, came out against any public scrutiny of madrassas and the government’s offer to appoint some teachers.