Kathmandu, Nepal -- It is early in the morning at the Amitabha Drukpa Nunnery on a hillside just outside Kathmandu and hundreds of devotees are walking clockwise around a golden statue of Buddha. 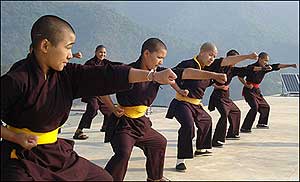 But rather than being immersed in prayer, up on the roof something different is happening - they are practising the same kung fu fighting made famous by the Bruce Lee films of the 1970s.

Young Buddhist nuns from the 800-year-old Drukpa Buddhist sect are being taught by their Vietnamese master.

The martial art was introduced to the nunnery two years ago and the nuns practise up to two hours a day.

"It's good for our health. Meditation is very difficult and if we do kung fu, then afterwards meditation becomes much easier," she says.

Another nun, Konchok, also from India, says she likes kung fu because it gives her strength.

"It's very helpful for our safety. If somebody teases us or something, then we can hit them and be more powerful," she says.

The confidence shown by these young nuns is unusual. Buddhist nuns in the Himalayas are normally seen as inferior to monks.

Jetsunma Tenzin Palmo, an Englishwoman who became a Drukpa Buddhist nun more than 30 years ago, says traditionally nuns have been neglected and overlooked.

"The main problem for nuns has always been that they have not normally had a good situation in which to live, they have not received the support from lay people that monks receive and they have not been educated.

"So often nuns became basically just household servants for their families or working in the kitchens and the gardens in the monasteries," she says.

Kung fu was introduced into the Amitabha Drukpa Nunnery by the leader of the Drukpa spiritual sect, His Holiness The Gyalwang Drukpa.

The Gyalwang Drukpa is the 12th incarnation of the leader of the Drukpa - or dragon - sect of Buddhism, which is the main religion of Bhutan and is widely practised in countries across the Himalayas.

He says that he felt that previous spiritual leaders had not done enough to advance the rights of women. 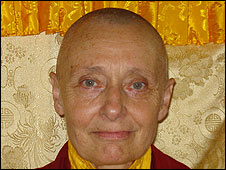 << Jetsunma Tenzin Palmo
"It's a beautiful life option to getting married, having a baby every year, working in the fields and doing the cooking"

"When I was very small, I was already thinking that it was not right to suppress women in our society," he says.

"But then when I grew up, I started to think what can I do for them? Then I thought what I can do is to build a nunnery and then give them an opportunity to study and practise spiritually," he says.

The nunnery built by The Gyalwang Drukpa, the Amitabha Drukpa Nunnery, is a modern, well-funded and a well-equipped place of worship and study.

"Not only [is it] just beautiful to look at, but it is a nunnery with the guidelines and the full support from their master, me," he says.

He says he encouraged the nuns to take up kung fu when he saw nuns from Vietnam practising it.

For the past week, the nuns have been giving demonstrations of their new skill to thousands of pilgrims who are attending the Second Annual Drukpa Conference.

The Drukpa sect, which places an emphasis on meditation, is popular throughout the Himalayas and also with Westerners.

Jan Duin, who is attending the conference from the Netherlands, says he has been impressed by the kung fu practice.

"I think it is very helpful physically and also psychologically because they do a lot of sitting practice," he says.

Buddhist nun Jetsunma Tenzin Palmo says that she'll be introducing kung fu into her own nunnery which is based in the Indian state of Himachal Pradesh.

"It's excellent exercise, secondly it's very good for discipline and concentration, thirdly it arouses a sense of self-confidence which is very important for nuns, and fourthly when any young men in the area know nuns are kung fu experts, they keep away," she says.

Jetsunma says since nunneries have begun to offer better education and physical programmes like kung fu, the number of young women who want to become nuns has grown dramatically.

"Many of them say, wow, if I become a nun I can study, I can practise, I can do these rituals, I can live together with all these other lovely nuns and lamas will visit us and give us teaching," she says.

"It's a beautiful life option to getting married, having a baby every year, working in the fields, doing the cooking, doing the cleaning.

"You know for them this is a huge opening up in a whole world that had previously been closed to them."