The kung-fu nun of Kathmandu

Kathmandu, Nepal -- She appears sheepish and timid as she makes her way up to the concrete roof of the giant four-storied assembly hall from the courtyard. 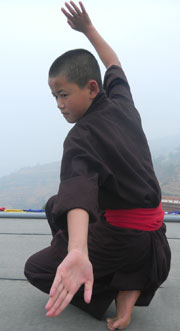 << Druk Amitabha Nunnery - A Sound Mind In A Sound Body: Striking a pose on the roof top

Once on the roof, 12-year old Jigme Wangchuk Lhamo is anything but gentle and compassionate.

Changing into loose maroon cotton pants and a long sleeved shirt, belted around the waist, Jigme throws quick jabs and punches and kicks higher than an average person. She is among 400 other nuns of the Druk Amitabha nunnery in Kathmandu, Nepal, who reminds visitors of a scene from a Shaolin kung-fu flick.

Everyday, the nuns wake up at 4 am and begin reciting and memorising Buddhist texts for about an hour, following which they engage in an hour-long practice of the martial art. The devote another hour towards the evening.

Jigme from Nganglam Dechenling in Pemagatshel is the most energetic and enthusiastic of the group.

She enrolled in the nunnery last year, after completing class five from Lungtenphu primary school in Thimphu.

Although she was among the top ten position holders in her class at Thimphu, Jigme said her faith in dharma and interest to become a nun caused her to discontinue studies.

“It’s my sixth month running here at the nunnery,” she said. Within that short span of time, Jigme can fluently speak Nepali, Hindi, Tibetan and Ladhaki languages, which are widely spoken at the nunnery.

Her Vietnamese master said that, although kung-fu was new to her, Jigme was able to attained the sixth of the 16 basic levels of the art.

“When I practise, I visualise I’m in a real combat,” Jigme said.

Besides learning to defend themselves from a handful of troublemakers in the vicinity of the monastery, kung-fu, Jigme said, made one capable of sitting straight-backed for many hours during meditations, ceremonies and teachings.

“It keeps me physically fit, mentally sound and helps me focus better,” she said.

The idea and the story resonates with those of the Shaolin monks in China, who learnt the martial art to defend themselves from passing bandits, besides the real concept of introducing it for health reasons by an Indian Buddhist priest named Bodhidharma (Tamo in Chinese), who visited a Shaolin temple.

Tamo, who joined the Chinese monks, observed that they were not in good physical condition. They spent hours each day hunched over tables where they transcribed handwritten texts.

The Shaolin monks lacked physical and mental stamina needed to perform even the most basic of Buddhist meditation practices. Tamo countered this weakness by teaching them moving exercises, modified from Indian yoga, which were based on the movements of the 18 main animals in Indo-Chinese iconography like tiger, leopard, snake and dragon, to name but a few.

He did not, however, introduce kung-fu, which existed in China much before his arrival. The ancient martial art is popular even in big Mahayana Buddhist monasteries. They believe that sound mind comes from sound body.

“Even Buddha Shakyamuni had said that, if you are sick, take medicine, even if a medicine is fish. Otherwise without body, practice is impossible,” His Eminence Khamtrul rinpoche said.

Jigme said the art taught the nuns to channel their energy and be positive about everything they attempted to do in their daily lives.

The founder of the nunnery, H.H the 12th Gyalwang Drukpa rinpoche, the spiritual head of the drukpa lineage introduced kung-fu class two years ago after watching nuns practising kung-fu in Vietnam.

He was told that it helped the nuns concentrate better and made them self-reliant.

Rinpoche said that was true because, ever since kung-fu was introduced in the nunnery, nuns rarely fell ill, which was a frequent occurrence otherwise.

On the contradiction of Buddhist principles of non-violence against learning martial arts, rinpoche explained that it all depended on motivation.

“If you are aggressive out of good motivation, you are an angry bodhisattva,” he said. Jetsunma Tenzin Palmo, an English lady, who became a nun more than 30 years ago, said if one knows how to defend oneself, one can stop an opponent without necessarily doing tremendous amount of damage.

“You’ll know which part of a body to disarm without hurting,” she said.

Apart from training the mind, keeping fit and improving concentration, kung-fu, she added, gave them a sense of confidence to protect themselves.

“When young men in our locality know the nuns practise kung-fu, they keep away,” Jetsunma Tenzin Palmo said.

Meanwhile, Jigme Wangchuk Lhamo hopes to, one day, introduce the ancient martial art in Bhutan. “My dream is to become the first Bhutanese kung-fu master, even if I can’t master Buddhist scripts,” she said.