The high-tech preservationsts at CyArk digitally captured this cultural treasure

Teipei, Taiwan -- The Hall of the Five Gates in Taiwan’s Lukang Longshan Temple is a mind-blowing work of architecture and religious devotion, featuring an intricately painted spider-web ceiling and granite columns carved with some of Taiwan’s most famous dragon designs. 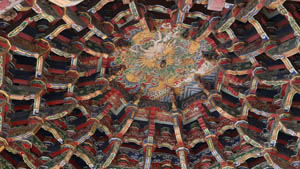 << The famous spider web ceiling at the Lukang Longshan temple

But the site - one of the country’s most important Buddhist monasteries - is constantly threatened by smog, and also happens to be built along the earthquake-prone "ring of fire." These challenges pose a tricky puzzle for preservationists fighting to preserve the site.

But now, the technological wizards at CyArk have teamed up with Iron Mountain to create an immersive digital record of the Lukang Longshan Temple, providing unprecedented virtual reality access to this cultural treasure.

Using the high-tech scanning techniques they’ve developed over the past 13 years, a CyArk team working with China University of Technology visited the site in March and digitally captured the 9,600-square-foot temple, inside and out. CyArk also used drones to take overhead images of the site. The team then processed the data and transformed it into a 3D environment now available online.

This detailed digital record is more than a simulacrum of the real thing, it’s an invaluable reference for conservators working to preserve the temple in the real world.

"Now, no matter what the future holds, we will have a record of this site and an ability to restore the temple," said CyArk Field Manager, Ross Davison. "A researcher in the twenty-second century will now be able to virtually visit Lukang and conduct their research in the virtual environment - it will literally be like stepping back in time."
TOP