WASHINGTON, USA -- The Bamiyan Buddhas in Afghanistan were destroyed by the Taliban with the help of Pakistani and Saudi engineers. 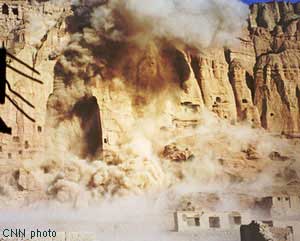 According to an account published here on Saturday, a local Afghan told the makers of a Swiss documentary on the giant statues which had stood there, carved in the side of a mountain for hundreds of years, had been destroyed by engineers from Pakistan and Saudi Arabia. The dynamiting of the statues took place in March 2001.

Swiss documentary filmmaker Christian Frei, who has made several documentaries that have won praise at various international film festivals, shot ‘The Giant Buddhas’ in Afghanistan. The film is due to be shown at the National Gallery of Art in Washington on 26 March.

The Taliban went ahead with the destruction of the giant statues, revered for centuries, because they considered them “offensive to Islam”. They ignored appeals from around the world, including UNESCO and an appeal from the then Government of Pakistan, made, it would appear now, more “for the record” than any serious intent to stop the Islamist zealots from destroying what the rest of the world considered mankind’s heritage.

Taliban minister of information Qudratullah Jamal said in a statement later, “The destruction work is not as easy as people would think. You can’t knock down the statues by dynamite or shelling as both of them have been carved in a cliff. They are firmly attached to the mountain.”

Museums and governments around the world kept hoping until the end that the Taliban would desist from committing what the rest of the world saw as an act of “cultural sacrilege” but they were adamant in their resolve.

A delegation from the Organisation of the Islamic Conference went to Kandahar to urge the Taliban leaders to change their mind, but was turned down. The Taliban information minister was quoted at the time as saying, “We would repeat to them as we have to other delegations that we are not going to back away from the edict, and that no statues in Afghanistan will be spared.”

UN Secretary-General Kofi Annan also urged the Taliban not to go ahead but was rebuffed. Koichiro Matsuura, the head UNESCO, said the agency would continue efforts to salvage other Afghan relics targeted for destruction. “It is abominable to witness the cold and calculated destruction of cultural properties which were the heritage of the Afghan people, and, indeed, of the whole of humanity,” he said in a statement.

Egyptian President Hosni Mubarak dispatched the Grand Mufti of Egypt to Afghanistan to plead with the Taliban rulers to spare the statues but his emissary had no success either. Zahi Hawas, the man in charge of the plateau holding the great pyramids outside Cairo, said at the time, “They are making bad publicity about Islam - and Islam has nothing to do with what is happening in Afghanistan.”

Xuanzang, a 7th century Chinese monk, pilgrim and chronicler, travelled to Bamiyan and wrote a graphic description of the statues. He even mentioned a giant “sleeping Buddha” in the area, but no trace has been found of that in modern times.