ENBILIPITIYA, Sri Lanka -- There will be many answers to the question: which is the country where the happiest people live? In response many famous, developed nations will come to mind, but you will be surprised that the name of a little-known country could be the right answer to this question. It is Bhutan, the wonderful and amazing country that beats all others on the happiness index. 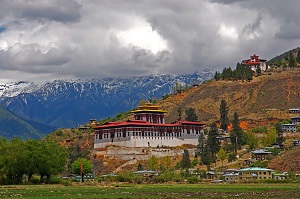 << The Dzong in the Paro valley, built in 1646. Credit: Wikimedia Commons.

Bhutan has been so identified following a worldwide survey on Gross National Happiness (GNH) – not Gross National Product (GDP). Its capital is Thimpu, which reminds us of the peace talks held there between the Sri Lanka Government and Liberation Tigers of Tamil Eelam (LTTE) separatists in 1985.

Recently I found the opportunity to fulfil a long-cherished hope of finding out more about this wondrous country, which recalls the island of Uthurukuru mentioned in Buddhist literature. The experiences I had in Bhutan proved that my visit there was truly my good fortune.

Bhutan, with a population of 750,000 people, is located more than 7,000 metres above sea level in the Himalayan region, near the world’s highest point, Mount Everest. The country has a cold climate (-18 to -7 °C) and the sky above Bhutan is always filled with white clouds rising above the mountain peaks surrounding the country. Human settlements are located some distance away from each other.

A foreign tourist visiting in the country practically finds himself/herself on a Buddhist pilgrimage because all the important places one sees are Buddhist temples and monasteries. Tourists are drawn towards the many big and small temples which have been built since the arrival of Vajrayana Buddhism in the 15th century, and most of which stand on hilltops surrounded by thick jungle.

Visitors are overjoyed by the wonders of the places when listening to the tour guide. They are visited by Buddhists to engage in worshipping the Buddha according to their traditions and also by non-Buddhists who go there to enjoy a calm and relaxed experience, respecting the sanctity of the temples.

Tourists take their own time in visiting the places, free of the distractions that can be found in Sri Lanka, for example, where all types of unscrupulous individuals attempt to cheat them by selling different items or becoming self-appointed tour guides to extort money from them.

Although there are various items on sale at shops near the places visited by tourists in Bhutan no one tries to force items on tourists. They are allowed to pick and chose whatever they wish and prices are fixed so there is no bargaining, unlike in Sri Lanka where vendors seek to hoodwink visitors by selling items at a price higher than at which they are sold to locals.

The restless behaviour of some Sri Lankan ‘bhikkus’ and lay persons whenever a group of local or foreign pilgrims visit a place of worship has become a joke. The reason is that all of them want to exploit visitors and line their pockets.

There is no selling of tickets or charging of any fee to visit any place of worship in Bhutan. Nor are beggars or children running behind visitors and pestering them for money or food to be seen. If someone decides on their own account to give the children something, they are very shy to accept but eventually do so and thank you in English.

It is most unfortunate that begging has become a ‘tradition’ in places of Buddhist worship in Sri Lanka. Needless to say it tarnishes the image of Buddhism in the eyes of foreigners.

There are both bhikkus (monks) and bhikkunis (nuns) in Bhutan – 30,000 bhikkus and 18,000 bhikkunis. Becoming a bhikku or bhikkuni is voluntary and temporary ordination is very popular in Bhutan. Entering the Order of the Sangha, even for a short period in life, is considered essential. Children are trained to adapt themselves to life in hermitages from the age of seven.

The expression “surprising but true” comes to the mind a thousand times when touring Bhutan. It is surprising, for example, that heaps of garbage are nowhere to be seen, neither in villages nor towns. There are no bags of rubbish by the roadside or hanging from lamp posts. Garbage bins are kept in specified places but are not overfilled making the rubbish visible from the outside.

However, it is in moral conduct and an ethical way of living that the Bhutanese are far above all other societies.

The government restricted cigarette smoking on and off until 2015 when a total ban was imposed on tobacco production and the manufacture and smoking of cigarettes. Foreigners are allowed to bring a limited number of cigarettes (200) with them and special places are allocated for them in hotels for smoking.

Strict laws are also enforced on the consumption of alcohol. No alcohol imports are allowed, the sale of alcohol is banned in the vicinity of temples, schools, hospitals, universities and community centres, and all alcohol shops are closed every Tuesday.

Cattle are a treasure for the Bhutanese who make use of them in a very meaningful way. In addition to being a source for the production of milk, ghee, cheese and butter, cattle are used for agricultural purposes in the rural areas.

It is an example to us in Sri Lanka that, in accordance with the Brahmana Dhamma Sutra of the Majjima Nikaya, the Bhutanese show due consideration for the welfare of cattle which help the people in their sustenance and livelihood. Cattle slaughter has been banned throughout Bhutan and it is a common sight to see cattle roaming freely on the streets.

For those addicted to the consumption of meat, it is imported, but during the first and fourth month of every year, meat consumption is completely banned, because these two months are considered religiously important based on the lunar calendar in Bhutanese culture. This mercy shown to animals reminds us of a similar law introduced by Sinhala King Amandagamini (67-79 AD).

Something else that amazes foreign tourists is that no poor huts and shanties are to be seen anywhere when passing small villages on the way to main towns like Paro, Punakha, Thronsa and Mongar. located hundreds of kilometres away from the capital Thimpu. And there are no helpless and unfortunate persons on pavements or at bus stops anywhere in the country.

Every citizen has a permanent house built according to state-approved plans, which are drafted according to national cultural standards and artistic designs. The result is that while all houses almost look alike, they might be even mistaken for temples because of their beautiful designs and carvings.

The three most important factors that bind the Bhutanese and contribute to their unity and harmonious living are king, country and religion. It is compulsory to display pictures of the king and the royal family prominently in every house, government and private establishment, hotel, hostel and temple.

The government of Bhutan is not interested in attracting foreign tourists at any cost. Hence, when applying for a visa, would-be tourists have to comply with a number of rules and regulations designed to prevent troublemakers and dubious characters from entering the country and corrupting the people of Bhutan. In fact, up to 1974, the only foreigners allowed to enter the country were those invited for specific purposes; others were allowed only after 1974.

Bhutan communicates with the outside world via two government-owned airline companies; no other airlines are allowed into the country.

No foreign tourist or groups of tourists are allowed to roam freely, and their attire and behaviour should not violate the country’s cultural norms. As a result, every tourist should register with a government-approved company and should travel with an authorised tour guide. A special examination is held for tour guides who should always be dressed in national costume and observe national and institutional customs when they are guiding tourists.

The rulers of Bhutan are teaching us Sri Lankans a far-sighted lesson by giving priority to protecting society’s moral standards and its physical and mental health rather than earning foreign exchange through tourism.

When thinking about Bhutan we are compelled to question the widely accepted criteria of development. Economists and social scientists – as well as politicians and the majority of us – consider that acquiring more and more physical resources and increasing personal incomes is the road to happiness.

Consequently we are focused solely on reaching economic targets, having entered a dream world via theories based on per capita income and foreign-exchange reserves. We are engaged in a relentless, tiring rat race towards so-called progress, symbolised by skyscrapers, highways, high speed trains, luxury vehicles, palace-like buildings, and so on.

Mesmerised by this mirage, we have become so selfish and ruthless that we are ignoring not only ethical living and moral standards but also obligations towards our parents, as demonstrated by what is happening in our country and the rest of the world.

The people of Bhutan are the living example on this earth that happiness alone is wealth as taught by the Buddha. The time has now come for us to realise that the true criterion of a happy country is where the people, without being trapped in unlimited desires, have fulfilled their basic needs and lead relaxed and healthy lives both physically and mentally, spreading goodwill among everyone. Bhutan has already set this powerful example for the world.

It is not political ideology but the Buddha’s incomparable teaching which has brought about this unique state of happiness in Bhutan.


---------------
Dr Omalpe Sobitha Mahathera is a senior Buddhist monk from Sri Lanka, who founded a Buddhist development network Sri Bodhiraja Foundation in the rural township in Embilipitiya in southern Sri Lanka. He is a former member of parliament and general secretary of the Jatika Hela Urumaya (JHU) a political party founded by Buddhist monks. This article was originally written in Sinhala and translated by Janaka Perera. [IDN-InDepthNews – 19 July 2017]

IDN is the flagship of International Press Syndicate.
TOP