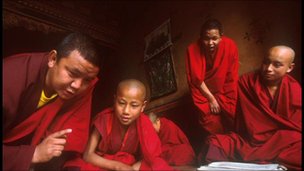 A Buddhist monk is likely to face five years in prison for violating strict anti-smoking laws in the tiny Himalayan nation of Bhutan.

Police have not named the monk but said he is 24 years old and was caught with 72 packets of chewing tobacco.

Bhutan says it is determined to become the world's first smoking-free nation. It banned the sale of tobacco in 2005.

But authorities admit that booming contraband traffic from neighbouring India has largely undermined the ban.

Critics say the flow of illegal cigarettes is so strong that it has failed to make much of an impact.

Kuensel newspaper said that the monk is the first person in the country to be charged under legislation passed in January which prohibits consuming and smuggling tobacco.

In addition it gives them power to jail shopkeepers for selling tobacco and arrest smokers if they fail to provide customs receipts for imported cigarettes - which are only permitted in very small quantities.

Smokers can legally import only up to 200 cigarettes or 150 grams of other tobacco products a month. They must provide a customs receipt when challenged by police.

A senior Bhutanese police official confirmed the arrest of the monk at the weekend after he failed to provide receipts to back his claim that he had purchased 72 packets of chewing tobacco from the Indian border town of Jaigaon.

"We will charge him with smuggling of controlled material, which is a fourth degree felony," an official of the Bhutanese Narcotic Drug and Law Enforcement unit told the BBC.

A fourth degree felony carries a sentence of five years.

The monk told the police he was "not aware of the new laws and had not kept the receipt" - a claim police have not accepted.

Monks are highly respected in a deeply religious society like Bhutan and thousands of them are maintained by the state.

Bhutanese people - some of whom drink and smoke heavily - have largely complied with the new laws, though somewhat grudgingly.