DHARAMSALA, India -- Heads and representatives of four major traditions and sub-traditions of Tibetan Buddhism and ancient Bon tradition are taking part in a 3 – day religious conference that began today at Surya Hotel here. The Tibetan leader His Holiness the Dalai Lama will preside over the meeting Friday. 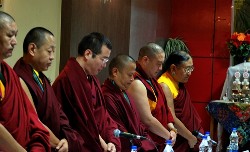 Religious leaders from Himalayan Buddhist regions and Kalmykia are also participating in the conference that is 11th of its kind. Tsona Rinpoche from Arunachal Pradesh said he was pleased for being invited to the conference.

Sources say that the meeting, among other things, will discuss the reincarnation of the 14th Dalai Lama, an issue that dominated media headlines and became a serious topic of discussion within the Tibetan communities, especially after China introduced a new law banning Tibetan religious beings from reincarnating without government’s approval.

Tibetans and supporters have repudiated China’s move as a blatant interference into ancient Tibetan religious tradition to tighten its control over Tibetans.

Tsona Rinpoche said that the issue of His Holiness the Dalai Lama's reincarnation is a matter of great significance not just to the Tibetans but also to several Buddhists and followers across the world.

The heads of various religious traditions and Bon will join His Holiness the Dalai Lama in a special prayer congregation tomorrow at the Theckchen Choeling temple here.

The Buddhist leaders’ meeting is being organized by the Department of Religion and Culture of the Tibetan Government-in-Exile.