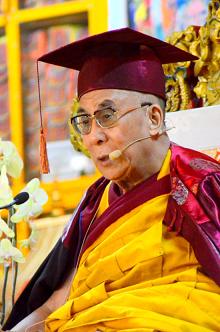 The Honorary Doctorate was conferred to His Holiness by Telo Rinpoche, the spiritual leader of Russian republic Kalmykia and some officials on behalf of the Tuva State University. The Tibetan Nobel Peace Prize Laureate thanked the officials and leaders of the 'Ministry of The Education and Science of The Russian Federation, Federal State Education Institute - Tuva State University' for their stand for human freedom and values.

His Holiness said that he visited once in Tuva where people have shown their genuine faith in Buddhism. "Tuva has a long-standing strong cultural ties linked to Tibet for past hundreds of years. Recent years, due to political reasons, I couldn't visit Tuva, however, many Buddhist followers from Russian regions including Kalmykia, Buryatia, and Tuva have come to here [Dharamshala] for teachings."

The Buddhist leader finished his teachings for Buddhists from Russia on"Tsongkhapa's "Destiny Fulfilled (tokjo dunlekma)" and Geshe Langri Thangpa's "Eight Verses of Training the Mind (lojong tsik gyema)." in Dharamshala Wednesday. Over the last three days, over 6,500 people attended the teachings. His Holiness' teachings were streamed live on the web. An astonishing thousands of others listened and watched the teachings live online.

Telo Rinpoche told the crowd that the decision on this outstanding Professor Award honor to His Holiness was made in October 2011. "Russian academic Council of the Tuva State University has anonymously decided to confer the honoring title of professor to the Nobel Peace Prize Laureate, His Holiness the 14th Dalai Lama, Tenzin Gyatso in acknowledgment of his outstanding input to the development of science, personal contribution to solving contemporary pressing issues such as protection of Human freedom, values and Rights, promotion of religious harmony, conservation of environment, strengthening of moral and ethical principals in society."

"For the past many years, we made our every possible effort to prepare His Holiness the Dalai Lama's visit to Russia, but, with many unfortunate conditions, we have faced many difficulties," said Rinpoche during the honoring ceremony.

The Russian Buddhist leader urged His Holiness for more teachings in near future. "We need to hear more teachings of His Holiness." He underlined that he was glad to see this widening participation, there is a growing interest among Russians in engaging in deeper understanding of Buddhism through teachings.

The spiritual leader of Tibet also agreed to confer more teachings and initiations for Russian Buddhists in the coming years. His Holiness said as being a Buddhist monk, it was his duty to promote compassion, religious harmony and to confer Buddhist teachings. "Today, the people from Tuva have prepared the honoring title of professor for me, I would like to thank them." His Holiness told the crowd. "As Telo Rinpoche has just mentioned and as I heard from Yulo Rinpoche, (Yeshe Lodoe Rinpoche, a Tibetan Budhist leader), It is not so easy to travel from far away to seek teachings.

"However, despite facing many difficulties and challenges, you all came here to join the teachings." His Holiness the Dalai Lama stressed. "It is very important that over the last couple of years' experiences, we have seen a steadily growing interest in Buddhism among the people in these regions," said His Holiness.