Monk's arrest turns into a controversy

Gulbarga, India -- The arrest of Buddhist monk Bhante Bodhidharma and four leaders of Dalit organisations on February 6 in Gulbarga district is snowballing into a major controversy with Dalit groupsand Buddhist monks from different parts of the country increasing pressure on the Government to withdraw the cases filed against them and release them unconditionally.

<< ‘Let them go':Buddhist monks from different parts of the country and Dalit activists taking out a procession in Gulbarga on Tuesday demanding the release of monk Bhante Bhodidhamma and four other Dalit leaders.— PHOTO: ARUN KULKARNI

On Tuesday, more than 21 Buddhist monks from different parts of the country including Gwalior in Madhya Pradesh, Rajasthan, Maharashtra and different parts of Karnataka including Bangalore, Bidar and Chamarajanagar, extended their support to the agitation, demanding the release of Bhante Bhodidhamma and Dalit leaders Nagendra Jawali, Kishore Gaekwad, Santosh Melmani and Hanumanth Itagi, who were arrested on February 6.

The police slapped cases under sections 153 (A), 295 and 504 of the Indian Penal Code against those arrested, and the jurisdictional JMFC court at Chitapur had remanded all the accused to judicial custody till February 16, rejecting their bail applications.

The bail application of the accused, which came up for hearing before the Fourth Additional District and Sessions Judge on Monday has been posted for hearing the objections of the prosecution on February 16.

State general secretary of the Dalit Sena Hanumanth Yelsangi told The Hindu in Gulbarga that eight Buddhist Monks from Gwalior, six from Nagpur in Maharashtra, three from Rajasthan, three from Bidar, two from Chamarajanagar and one from Bangalore participated in the indefinite dharna launched here on Monday. 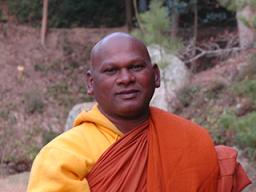 “We will not rest till the unconditional release of Buddhist monk Bhante Bhodidhamma and four other Dalit leaders, and until the State Government initiates action against the Assistant Commissioner of Sedam Sub-Division D, K. Ravi,” he said. The Government should also initiate action against Police Sub-Inspector Shrimant Illal, who was attached to the Wadi police station at the time of the monk's arrest.

The Dalit leader demanded that the Government book cases under the Scheduled Castes and Tribes Atrocities (Prevention) Act against Mr. Ravi and Mr. Illal.

‘We will not rest until their unconditional release'

On February 5, 2012, Bhante Bodhidhamma went to a Buddhist site which was excavated some years ago at Sannathi Village, Tq-Chittapur, Gulbarga, Karnataka State.

Bhante was stunned by the condition of the site, realizing that the Archeological Survey of India was not properly protecting the archaeological monument.  Many Buddhist statues were found missing and many ancient monuments were not properly perserved.  The artifacts were found to have been eroded by rain, dust, wind and organic debris, causing the monuments to deteriorate. 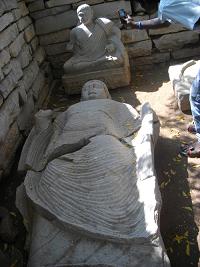 Broken statue of Buddha at the excavated site in Sannathi Village, Karnataka.  The Archeological Survey of India was accused of not properly protecting the site >>

It was also found apparent at the site that the Assistant Collector of Sedam Tahsil and the responsible overseers of Archaeological Survey of India have allowed the installation of an idol of a Hindu goddess.  Indian law prohibits such action, as the site is clearly demarcated as a historical Buddhist place of devotion.

Local Members of Legislative Assembly, Assistant Collector of Sedam Tahsil Mr. D. K. Ravi, and Archeological Survey of India local staff were alleged to have allowed the "Hinduization" of the Sannathi Village site in a manner which was designed to provoke Buddhist Dalits.

When Bhante Bodhidhamma protested the desecration by Brahmin forces, he was arrested and jailed without bail by the Chittapur Court under the notoriously misused and abused sections 153 (A), 295 and 504 of the Indian Penal Code.

The fact remains that these are the very statutes that were violated in the attempt to convert the Sannathi Village Buddhist site to a Hindu place of worship by the Brahmin worshippers.

The Buddhist Dalits of Gulbarga district have conducted many protests in different locations.  On February 14, 2012, there was a huge rally in Gulbarga City, Karnataka State, where a group of thirty Buddhist monks have stepped forward in solidarity to protest the incarceration of Bhante Bodhidhamma.