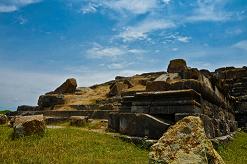 The department has already sent a plan to the Archaeological Survey of India proposing to install basic facilities at these sites.

Places like Parihaspora, Harwan and Kanispura-Ushkura, which still have ruins of Buddhist monasteries, are planned to be included in department's pilgrimage tourism initiative.

Director of Jammu and Kashmir Tourism, Talat Parvez, said on Sunday that they would develop the whole circuit of tourism.

"There are many such ancient places and monuments where we want to promote tourism. We have done a documentation, which we will bring forward in the shape of a coffee table book in the next season. This coffee table book will become a source of promotion and such places will become prominent. We are also promoting circuit tourism," said Parvez.

Besides their historical importance, these sites hold a lot of significance and emotional attachment to Buddhists the world over.

Once these sites are developed, they will give a boost to local infrastructure and generate employment for locals.

Historians said that the Buddhist monastery in Parihaspora town, which is located at a distance of 26 kilometres from Srinagar, is one of the famed sites and if the provincial government pays attention and give it facelift then tourists will visit the place in large numbers.

"People do no come here in Kashmir to look only to the scenic beauty. They also would like to see the old heritage and how the civilization has developed here. So, if we see this is one of the biggest civilizations, which was here and this was the central place at one point of time. Now nobody recognises this place, it is all in shambles. So, the need of the hour is not just to preserve them, not just to put fence around them but to also bring people here to look, so that they will themselves see and develop the area around the vicinity," said a historian, Professor Mohammad Sultan.

Tourism is one of the biggest means of earning for the people of the Kashmir Valley. It was hit hard by the separatist agitations, which had adversely affected the turnout of tourists.

Meanwhile, Kashmir of northern Jammu and Kashmir state was once a top Asian tourism destination, popular among honeymooners, skiers, trekkers and anglers, and attracting about a million tourists a year until 1989, when a simmering anger against New Delhi's rule burst into a violent rebellion. And the numbers of visitors shrunk to only a few thousand a year.

However, with peace being restored in the province, the influx of tourists has increased.